O happy day! The ‘free’ surveillance/advertising-centred/data-cow business model has been superseded by the pay-to-be-spied-on contract for e-commerce 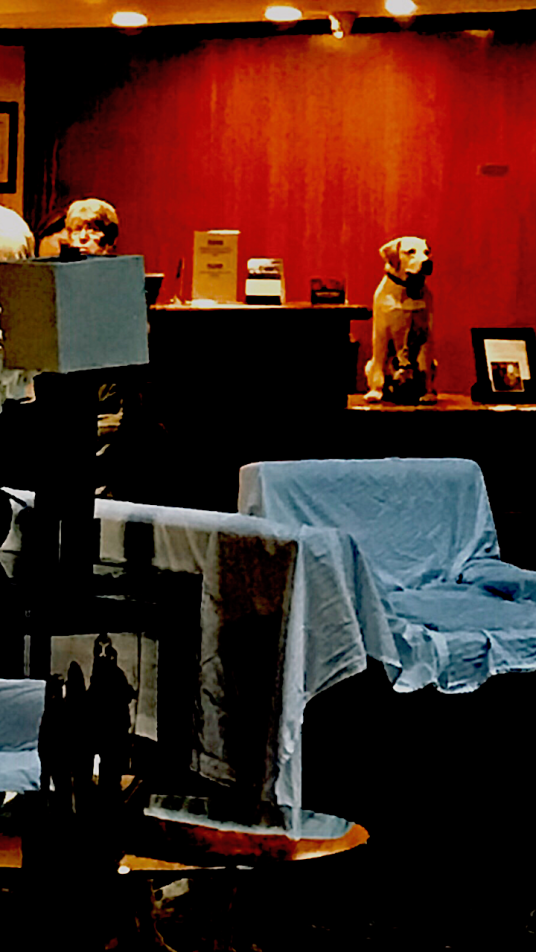 A watchful pair: he was too intent on his task to move a single canine muscle **

The tale of Big Brother at A Certain Newspaper (ACN.com), the last entry on this site,  omitted a crucial fact because it deserves its own post.

It is this: access to the visitor-sleuthing, visitor-interrogating ACN site is not free, but requires a subscription. Reader, if you haven’t noticed, this should tell you that things have gone from bad to dire — well beyond the normalisation of the surveillance business model’s (SBM) unwritten contract, in which the actual cost of ‘free’ admission and use of a site’s services is the loss of our privacy.

Bowing to the SBM meant accepting that when we pay no cash to use  Facebook — and innumerable other web services, including search engines — these companies can make records of our every click and cursor twitch. In many cases they do worse, following us wherever we go on the net, even after we have signed out of their domains. We have effectively told them, do come in and help yourselves to anything you’d like to know about us — or, as post-Gutenberg has observed before: by all means, please milk us like dumb data cows.

In the SBM’s successor, the pay-to-be-spied-on model for e-commerce that we are now bowing to in an almost imperceptible transition, we are giving them money to exploit us. In our delight with the discount on sub-zero winter boots and free shipping that the online retailer offers us, we do not object to being hooked up to the automated data-milking machines that our cash helps to finance ***.

The media version of this shift entails a striking switch in the terms of trade that our ACN.com encounter dramatised. In the old days of print, a newspaper handed over pages filled with news and analysis in exchange for our coins — and those paper pages had countless secondary uses. The exchange between buyer and seller ended, there. Today, a newspaper can believe that the sum billed to a credit card entitles it to monitor and record exactly how the owner of that plastic rectangle reads its online pages — to facilitate ‘personalising content and ads,’ as the ACN.com site informs visitors, ‘and to analyse how our sites are being used’ — today, tomorrow, … whenever.

What we call data-milking is blandly referred to by digital commerce specialists as ‘data-gathering.’ One such expert, Josh Bernoff, writes about ‘the data equation’ — implying that there is a fair and just equivalence in Facebook users paying with undefined ‘data and attention’ to upload what they want to communicate or ‘share’ on the social media platform. But saying ‘equation’ is applying a misleading euphemism to what the average Facebook user grasps, since that user does not understand the SBM, or know that it is also the advertising business model. Users do not understand how they enrich social media giants by letting them hawk facts about their behaviour and demographic and psychological profiles to other companies that use the information to maximise their advertisements’ ability to seduce them into buying their products.

In a perceptive post on Medium.com, Bernoff suddenly swerves sharply from tip-toeing around the sensitivities of e-commerce giants to making the critical point that users ‘are happy to give up an infinite amount of data’ to social media platforms and predicts — sadly, without exaggeration — that most of them will not stop doing this until ‘Facebook starts taking naked pictures of everyone in the shower and posting them without permission.’

That was a point made in his ruminations in early October about whether the software that Tim Berners-Lee (TBL) has been developing to return control of their data to internet users will be usable and used by enough people to reverse the soaring trend of exploitation, manipulation and restriction. Bernoff concludes that this will not happen unless a rich, dominant company can adopt and deploy it to support TBL’s project.

He nominates Apple for the task.

We cannot imagine a better use for Apple’s cash mountains than destroying the surveillance business model. But surely putting Apple in charge of creating ‘new devices, new experiences, new apps, and new ways to entertain yourself and experience life without requiring you to give up all your data’ would be a move in the wrong direction — further centralising power, when TBL is trying to take the web back to the freeing open space it was originally?

Today’s Tim Cook-led Apple appears to have high ethical standards, but what guarantee is there that this company’s tremendous potential for doing good would not be misused if he were replaced by — say, someone like Mark Zuckerberg, whose actions seldom match the high humanitarian ideals he claims to believe in, and who chronically breaks promises about protecting and respecting the privacy of Facebook users?

What might be more compatible with TBL’s aims? Putting Apple’s cash and managerial resources behind social media platforms that their users jointly own. Apple could assist with and finance their design and launch.

See: ‘The media establishment has begun to see sense in a user-owned Facebook …’ An extract:

… [L]ast Wednesday, the New York Times presented, as if this were a brand new idea, the otherwise commendable suggestion by three scholars — Jeremy Heimans, Henry Timms and separately, Nathan Schneider in 2016: ‘[W]hat if a social network was truly run by its users?’ In a newly published book they have written together, Heimans and Timms note the unfairness of what we — like many others — have been pointing out for years: the injustice of ‘the creative output of billions of people’ being turned ‘into a giant, centralized enterprise, with most users sharing none of the economic value they create and getting no say in the platform’s governance.’

*** Why are we permitting this? See John Logan’s reference, in his comment on the last post-Gutenberg post, to soma — the drug crucial to subjugating the masses in Aldous Huxley’s Brave New World (1932), which creates ‘a quite impenetrable wall between the actual universe and their minds’. Imagining themselves as ‘celebrities’ on their Facebook pages, and riding waves of happiness from online shopping discounts that let them buy-buy-buy probably works a similar dark magic on real, live, people in our time.