Last week’s entry on David Lankes’s ideas for redesigning libraries to be centres of brimming invention and maximally engaged enlightenment for communities led to two discoveries. The first was a new post on his personal blog about his recovery from a terrifying illness — a turnaround owed to a harrowing but successful stem cell transplant — which, we hope, will be swift, strong and complete. In this report, he tells – in passing – of having been the target of exceptionally nasty attacks by some fellow-librarians.

All genuine reformers have stories like this – and the hostility is often in direct proportion to the importance of the changes being seeded and sown. Anyone who doubts this need only read Tuesday’s report in The New York Times about the resentment at the World Bank of a reorganisation instigated by its president, Dr. Jing Yong Kim, who has also – as an expert in fighting epidemics — made it his personal mission to put the Bank’s resources at the disposal of Ebola-stricken African countries at a speed insiders thought impossible, before the fact.

Next, we learnt about a contest organised by the Knight Foundation in which competitors are invited to submit schemes for turning libraries into more or less the places Lankes envisages – although it does not actually say so in its brief for contestants. This organisation’s charter entails financing ‘transformational ideas that promote quality journalism, advance media innovation, engage communities and foster the arts.’

The proposal of Phil Shapiro, the other future focused librarian mentioned here last week, captured our attention because it describes – down to its precise technological components – a way for ordinary citizens to create biographical and historical multi-media records by interviewing each other. Any fan of Studs Terkel’s brilliant and moving Working: People Talk About What They Do All Day and How They Feel About What They Do (1974) hardly needs an explanation for why that is such a good idea in itself. The contestants clarify their ideas in a crisp interrogation.

In one sentence, describe your idea as simply as possible.

Video booths at public libraries that allow community members to interview other community members over the web with the video and audio captured locally in high quality — and merged after the fact using free, open source software or a web video editing service such as Wevideo.com

Briefly describe the need that you’re trying to address.

Libraries are about the sharing of ideas. Some of the best ideas are in the minds of people who are not famous and who also do not have the video or computer skills to create their own YouTube videos. By giving community members a chance to interview each other, many interesting new ideas will be uncovered that will spark new conversations and new thinking about communities.

Reading that Q and A revived a memory of how social inequality can unbalance the historical record – and of an unsuccessful attempt, a few years ago, to lobby for a remedy at famously left-wing Berkeley. It inspired the following contribution to the feedback that Knight wants members of the public to leave on the competing plans — which fits this blog because it could help some suffering traditional publishers, writers, artists and media workers to understand why it isn’t just that the post-Gutenberg revolution cannot be stopped. Painful as it is for us, it should and must continue, with our encouragement and support.

… Years ago, in researching a book about the culture and characters in the most cosmopolitan segment of American farm country – the Napa Valley — I drew on a superb collection of transcripts from the Bancroft Library’s Regional Oral History Project at Berkeley. Comparing what the same subjects told me with what they were willing to tell the Bancroft interviewers was fascinating.

A decade or so after that, I rang the BROHP director with a proposal to interview someone in California ranch country, a woman of about my mother’s age who was the librarian in a small town to which she and her husband had migrated when he got a job as a ranch hand nearby. She had a sharp and original mind, a biting wit, and a fabulous hoard of stories about her past — for instance, surviving the Depression with her family, as a girl, helping sheep to give birth, and working at two jobs to help keep the family afloat.

I told the Bancroft director: most of the records of the local historical society focus on the top strata of the ranching communities in the region. What if an interview with this particular subject was the first in a series about families at the other end of the economic scale?

He said that that wouldn’t be possible. His organisation relied on donations from the outside to supply the money for the video recording equipment, video editing, travel, and so on. The reason why the Napa Valley was so well represented in the Bancroft collection was that the ‘wine industry’ had been outstandingly generous with funding. But wouldn’t that unbalance the history of rural California, I asked. His answer amounted to a shrug. He agreed with me, but didn’t know how to solve the problem.

I don’t know that the Bancroft’s oral archive still has this flaw. I hope that the bias has been corrected … 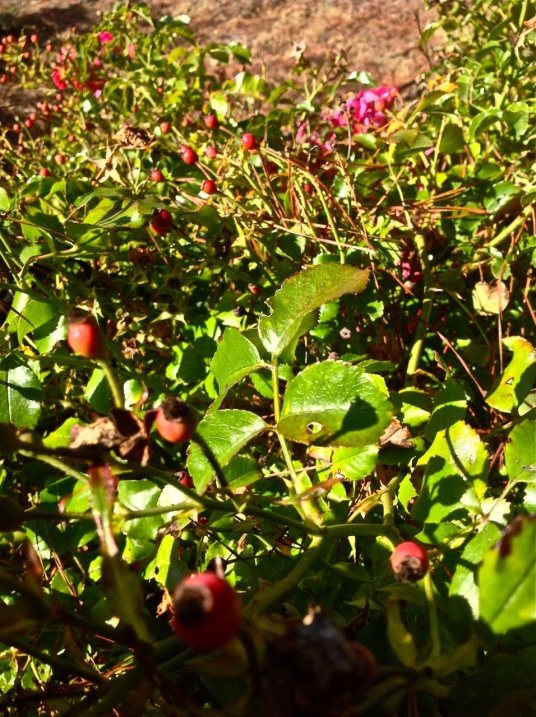 Roses setting seeds in a drought (part 2 of a story in pictures) — postgutenberg [at] gmail.com