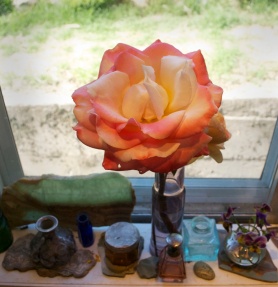 A virtuoso painter and craftswoman friend — prolific, courageous, stoical in degrees that sometimes defy belief — grew up among Californian country folk, on the margins of the Pacific, in high trees and curling mists a few miles south of a refuge for artists established by an autobiographer who wrote these lines:

… [W]hy did I collect art? Or even more pertinently, what is art? I answered this question in my play Phallacy …:

REGINA If the beauty of this sculpture is not important, what about art?

REGINA An image from the mirror of life.

REGINA: All right then. How about Art being everything other than what you see in the mirror?

REX Better! But how necessary is that?

REGINA Art is never necessary. It just happens to be indispensable.

For me, not as a collector but as a human being, art happens to be indispensable. Isn’t art what distinguishes us from all other species?

Those are words of the late Carl Djerassi, and the retreat, his well known Djerassi Resident Artists Program. Before he jumped tracks to write novels and plays in late middle age, he made his name — young — as a scientist of the same rank as the superstars in our last two entries on this blog (part 1  and part 2).

Lately, the reminders of him have been so frequent — and cheering — that some of the mystically inclined would offer them as certain proof of haunting.

Another reason why he swims into view, in an inner eye, is indirect. We often think of him when we hear from our artist friend, who would have been a sort of neighbour of his, had she not flitted away to an art academy and the next act in her life in virtually the year he bought himself an outsized eyrie in the Santa Cruz range. Like him, she shone in school — especially as a science student. Then one day, she met and was magnetised by a whole family of artists living nearby. Watching them draw and paint — with radiant abandon — made trying her own hand irresistible. In no time, she was an addicted arts-worker-for-life.

The rest of this story told only in its leanest outline — to protect someone shy — is, on the economic plane, all too predictable. Though her work has found devoted fans to whom she ships orders at addresses all over the world, and she lives simply, with few luxuries, financial security has always been a dream never quite within grasp.

Dr. Djerassi, by contrast — even if he had been merely a successful scientist, not one referred to as ‘the father of the birth control pill,’ was virtually guaranteed a life free of money worries by turning the exceptional aptitude recognised at university into a career.

Here is the question that led to this post: is it necessarily quixotic (or mad or pointless) to wonder whether this cliché of contrasts — comfortable scientists and struggling artists — should be accepted as inevitable and unalterable, forever?

Accepted even though a Carl Djerassi was as unembarrassed as a Lawrence Steinman or a Josef Penninger in wearing his love of, and need for, art on his sleeve — long before he took off his lab coat to write poetry and fiction? Even if large numbers of practical materialists will scoff, ‘But that’s absurd! How could artists deserve to be compensated as well as scientists, who save lives, and whip up whizzy innovations entrepreneurs use to build technology giants, and send people to Mars?’

Ah, but if artists feed the souls of those scientists?

Better than setting up arts foundations and handing out grants, what if scientists were to make a sacred mission of looking for new ways to buy more work from artists of all descriptions? Employ more gifted and even daring architects to design their research centres and laboratories, … designers to add eye appeal to the utilitarian interiors in which they usually toil, … spend real money on aesthetically pleasing web sites … on art for scientific book and journal covers, and between them … and employ more editors capable of honing and adding lustre, if not poetry, to their words … ?