… Now and then, as in this week’s entry, post-gutenberg.com will spotlight signs that the keiretsu-cooperative — a structure for co-owning media — is an idea whose time has come … 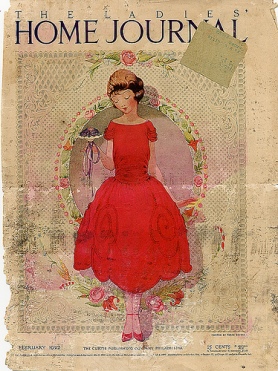 That the Ladies’ Home Journal – an American magazine founded in 1883 – was still being published at all came as a bigger shock than reading about its plan for avoiding extinction. It is a title I have only ever seen mentioned in biographies of writers and political history, but it apparently has a circulation of over three million. A headline caught my eye:  ‘A New Ladies’ Home Journal Written Mostly by Readers’.

Aha! I thought, could that signal an evolutionary leap in the treatment of  ‘user-generated content’? Had I stumbled on the experiment in co-owned media that is long overdue, for some of us – as a first stage of true media reform?

No it is not, but that could conceivably be the next stage of the LHJ  plan. From its March issue onwards, the magazine is to be filled with articles by amateurs paid at professional rates, whose facts will be checked by the editors. The publisher, Diane Malloy, explained that

research showed the magazine’s readers wanted more of their voices reflected in the content and to feel as if they belonged to a community.

If the LHJ  were to go on to give readers a stake in the magazine, that would ensure far more passionate commitment and loyalty to their community.

A speech for the ages by Nick Clegg

Co-owned media got an indirect vote of confidence from Nick Clegg, Britain’s deputy prime minister,  in a 16 January speech more thoughtful than any set of utterances by a politician I have seen for a long time. What he proposed, addressing business leaders in the City of London– no less – is the most intelligent solution to the widening social inequality on which the Occupy movement has focused our attention. Somehow, that clear implication of what he said went largely unreported in media coverage of the event.

[W]e … need a better distribution of power within our economy.

… [I]t’s not just shareholder power that matters. Ultimately investors seek profits … Some enlightened shareholders might see the benefits of a well-rewarded workforce, but the people best placed to look after the interests of staff are staff. And that is what, so far, has been missing from this debate: ordinary people.

[W]e don’t believe our problem is too much capitalism: we think it’s that too few people have capital. We need more individuals to have a real stake in their firms.

Readers of this blog will know how closely aligned his conclusions are with ideas expressed here – in ‘Wanted: a brave newspaper for an experiment in which readers become stakeholders’, and ‘Co-owning media is on the horizon, and press coverage of the Leveson enquiry shows why we need this.’

In a speech last July,  the P. M.’ s deputy took a stand against the unhealthy concentration of power in the media:

[D]iversity of ownership is an indelible liberal principle because a corporate media monopoly threatens a free press almost as much as a state monopoly does.

Jaron Lanier comes to the right conclusion about paying for content — or rather, paying whom

A super-geek he may be, down to his last dreadlock, but Jaron Lanier inspects the classic positions and tenets of the geekocracy with a coolly objective eye. He advocates compensating the ‘ordinary people’ Nick Clegg mentioned, not — so far — as stakeholders, but as suppliers of ‘content’ that media moguls and their giant corporations, like Facebook, are exploiting shamelessly. He asked in the New York Times last week:

What if ordinary users routinely earned micropayments for their contributions? If all content were valued instead of only mogul content, perhaps an information economy would elevate success for all. But under the current terms of debate that idea can barely be whispered.

Obviously, the editors at the Ladies’ Home Journal – paying their readers the same fees for content as professionals – are shouting, not  whispering, their understanding of the way media reform will now proceed.

An instructive poll for the Guardian

It was astonishing to see the results of a poll on the Guardian site related to the Clegg co-ownership proposal. Eighty-seven per cent of the poll-takers voted ‘yes’ in answer to a question referring to Britain’s most famous employee-owned company: ‘Would you like to live in a John Lewis style economy?’ That surely added up to endorsing a recommendation of  such a structure for ownership of the Guardian itself, or some part of it — even if proposals made in the online paper’s comments section for experimentally co-owning bits of it with readers  were censored more than once last year.  Ahem.

Nick Clegg and his personal think tank appeared to have anticipated precisely such — erm, discouragement, when he suggested in the same speech,

… giving employees a new, universal “Right to Request” shares. Imagine: an automatic opportunity for every employee to seek to enter into a share scheme, enjoying the tax benefits that come with it, taking what for many people might seem out of their reach, and turning it into a routine decision …

In other words, no one would be censored or punished simply for asking an employer for a stake in a company… Still, well done, Gruan, for conducting that poll.  Soon, you might almost be as brave as the Ladies’ Home Journal.