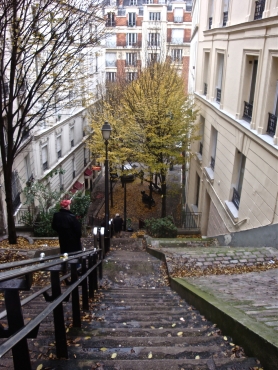 Marcel Proust was surely here: a Parisian backstreet not far from Sacré Couer
– postgutenberg [ at ] gmail.com

‘Artistic people aren’t respected.’ We quoted someone to that effect a year ago – a close relation of someone else of strikingly conventional views, but unusually plain-spoken, who says frankly, ‘I want power,’ and would like to have been a lawyer or politician.

We thought of her as we read a recent interview with an American Supreme Court judge, Justice Stephen Breyer, translated by The New York Review of Books from a French literary journal, La Revue des Deux Mondes. Justice Breyer was talking with marvellous fluency about his near life-long love of Proust’s In Remembrance of Things Past. The edited transcript of the conversation reads like an early Christmas card – except that the most winning images of doves, poinsettias, Boticelli angels and white-bearded old men clad in scarlet, humping sacks of gifts, cannot compete, as channels to transcendent happiness, with what he says about the supreme importance of literature:

Q: This year marks the centennial of the publication of Swann’s Way. In your opinion, what is the novel’s greatest contribution?

A: What I especially remember is the meditation on the passing of time at the very end of that volume, when the narrator strolls through the Bois de Boulogne just as Odette used to do so many years before. But the forest he walks through is no longer Odette’s forest. Time has passed. Women are no longer dressed the same way, the fashion has changed, automobiles have made their appearance. And as he watches the women promenade down the chestnut-lined allées, the narrator wonders: “Where has Odette’s world gone? Has it vanished forever?” The answer of course will come much later, in Time Regained. This world still exists, but it does so in our memory, in our recollections, and what gives it new life, what rescues it from oblivion, is literary creation. It is the work of art that allows us to rediscover lost time.

Q: During a lecture you delivered at New York Law School, a student asked you what major you would recommend he select in order to become a lawyer. Your answer was quite surprising: you suggested that he choose “whatever major you want, as long as it has nothing to do with the law.” You, in fact, studied philosophy at Stanford and Oxford before studying the law at Harvard. How can the humanities or foreign languages be an asset for a jurist?

A: It’s true, I’ve always thought that it was not particularly useful to study law as an undergrad. We are only allowed to live one life: it’s the human condition, there’s no escaping it. In my view, only by studying the humanities can we hope to escape this fundamental limitation and understand how other people live. Because literature, history, or philosophy all provide extraordinary windows on the world. Foreign languages, too, are fundamental.

The French language gave me an entrée into another culture. It allowed me to discover different means of expression, a different way of life, different values, a different system of thought. Because when you’re a judge and you spend your whole day in front of a computer screen, it’s important to be able to imagine what other people’s lives might be like, lives that your decisions will affect. People who are not only different from you, but also very different from each other. So, yes, reading is a very good thing for a judge to do. Reading makes a judge capable of projecting himself into the lives of others, lives that have nothing in common with his own, even lives in completely different eras or cultures. And this empathy, this ability to envision the practical consequences on one’s contemporaries of a law or a legal decision, seems to me to a crucial quality in a judge.

… Literature is crucial to any democracy. Take the field of women’s rights, for instance. You have to read Mme de Lafayette’s La Princesse de Clèves to realize how narrow a range of opportunities were available even to a highborn young woman in the seventeenth century. They had a choice of either marriage or the convent. It only got worse in the nineteenth century, because along with the pressure of the church, there was the male stranglehold on all property rights. It’s evident in Balzac’s novels, for example. In Balzac, there are mainly two types of women: prostitutes and brebis, or ewes, who are all victims. Eugénie Grandet is a victim. Madame de Mortsauf, in Le Lys dans la vallée (The Lily of the Valley), is one too.

… Personally, I get a great deal of pleasure from writing. I take great satisfaction in drawing out the substance of matters that are separate and unrelated and giving them form on paper, through writing: that too is a creative process.

Q: In France, there is a very special prestige that attaches to being a president who is a “man of letters” or a “friend of the arts.” In the United States, the label of “man of letters” seems to be much less valued in the realm of politics. A presidential candidate or a sitting president is unlikely to express his or her literary tastes publicly, much less claim to be “cultivated.” How would you explain this difference between the two cultures?

SB: I think that Tocqueville can help us to understand that difference. He very rightly pointed out that there is a mistrust of elites in the United States. […] Now, in France, art and power have always been bound up together, whether under the monarchy or in a republic. You will not find the same proximity between the spheres of power and culture in the United States.

… [T]heater tickets—could they be considered basic necessities, and could they be regulated as such? The majority thought the theater was not a necessity. The great Justice Oliver Wendell Holmes Jr. replied in his dissent: “We have not that respect for art that is one of the glories of France. But to many people, the superfluous is the necessary.”

Q: You often emphasize the beneficial role of artistic creation for all of us.

A: To me, the distinguishing characteristic of human beings is the desire to create order out of chaos, to give form to the universe. We are surrounded by colors, shapes, and sounds. We can arrange all these things in an attractive and constructive manner, as in a painting or a symphony. And that is what Proust did with his writing. Of course, he was supremely talented—but I firmly believe that every one of us can, to some extent, try to establish order amid chaos.