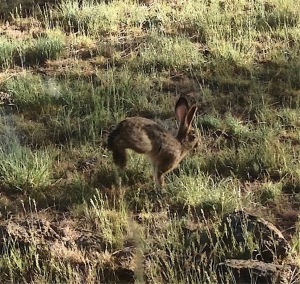 Don’t be ridiculous, you say — who ever heard of an Easter jackrabbit? It doesn’t even look right!

Here is proof of how suspicious we must all be about some of our most ancient presumptions. The first and true Easter hopabout in the ancient symbolism was a hare, not a rabbit at all, or certainly not a Beatrix Potter-ish flopsy bunny.  So also — technically — is the Lepus californicus or black-tailed jackrabbit. Last April, we discovered we were virtually cohabiting with a member of this tribe — being closely monitored round the clock by it, indeed, in a comradely, affectionate sort of way, during a wilderness break of about a fortnight.

This jackrabbit knew which room of our stick abode we were in, and in exactly which window we sat writing. Its species is renowned for its acute hearing, which must have something to do with those giant ears proportionately bigger than any other mammal’s on earth.

Whereas rabbits are born with eyes shut, hares drop from their mothers with theirs wide open.

For none of those reasons, but another, we feel a close kinship with these silent, hyper-energetic wild beasts sometimes indistinguishable from lava rocks of their size in their habitat, until they leap. Post-Gutenberg scribbles most efficiently long into the night. That is when the nocturnal jackrabbit forages and nibbles — although our trails have also crossed by daylight, especially in the late afternoon and early evening.

We have learnt from an irresistible summary on rabbit.org (yes, there is such a thing) of  ‘The Easter Hare’ by Katharine Hillard, published in The Atlantic Monthly in May 1890, that despite Easter Sunday’s closeness in years like this one to the vernal equinox, its date moves from year to year for reasons only indirectly related to that day, and that it is more accurate to think of it as a lunar, not solar, celebration. It is calculated in relation to both the equinox and the first full moon after it.

Part of the proof of the origins of this Germanic tradition happens to be in Sanskrit.

Easter is not really a solar festival, but rather one of the moon. The name Easter comes to us from the Saxon Eostre (synonymous with the phoenician Astarte), goddess of the moon. From the most ancient times, this goddess was the measurer of time. Her name as we know it (moon) comes from the Sanskrit mas—from ma, to measure— and was masculine (as it was in all the Teutonic languages).

No matter how closely we inspect these pictures and a few others in our jackrabbit collection, we never come to a conclusion about whether our rabbit is a he or she. Looking up links between hares and Easter, we found that there is good reason for this in the symbolism. The ancients, ‘Pliny, Plutarch, Philostratus, and Aelian,’ believed that hares were hermaphrodites, or …

… that a rabbit could change its sex—like the moon. Other stories in Sanskrit and Hindu[sic] connect the rabbit to the spots on the moon (related to the story above); to stories of hares dwelling upon the shores of the moon; and as mortal enemy of the lion (sun).

Gender hopping is an experience post-Gutenberg has only ever sampled in commenting pseudonymously on the net, or in sock-puppetry — two kinds of masks that we warmly recommend you try, too, dear reader.

In fact, if you try them out today or on Easter Monday, you will correctly be interpreting the pagan, pre-Christian message linked to hares at this time of year as: be fruitful and multiply … yourself.

Which would surely entitle you to at least one more hare-borne chocolate egg.