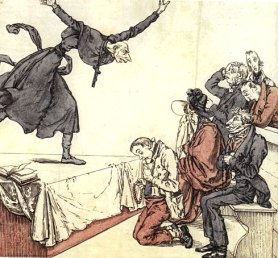 Bloggers are free to ‘speak truth to power’ as idiosyncratically as caricaturists
– an 1834 protest against corrupt clerics by the Swiss artist Martin Disteli: Wikimedia Commons 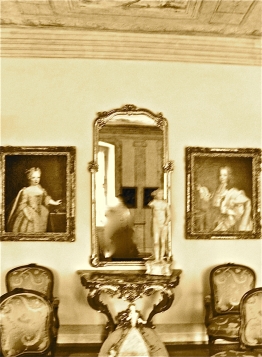 In 2013, a blog post — whether buoyant or morose — can tell you nothing about a blogger’s actual mood or state-of-life, unlike the exhibitionistic diaries that people originally thought web logs would be. The time has come to toss out stale do’s and don’ts about blog-running. A blog does not have to be run like a newspaper, newsletter or magazine for bloggers to supply information in the public interest . It can do its bit towards changing the world without round-the-clock, daily, or even regular posts – as long as it is written with care, and its existence is recognised by search bots.

It might or might not attract commenters, depending on whether a blogger has the time or inclination to chat with visitors and — on serious subjects that matter greatly — visitors’ willingness to risk looking foolish, or face the unintended consequences of comments discovered by their near-and-dear, employers or workmates.

Boosting site traffic is of keenest interest to bloggers blogging strictly in the hope of blog monetisation – which, as things stand, would mean that Florence Nightingale, if she were a contemporary, would have to shrink anything she had to say about medicine to thought-capsules insinuated between large nude ‘selfies’ in which strategically positioned cat pictures hid her peekaboo bits, all of this framed by cosmetics and fashion ads. She would need to devote rather more energy to luring ‘likes’ than to nursing.

It struck us that in 2013, although free – unmediated – expression is the aspect of blogs that gets the most attention, a blog today might be even more like a Victorian parlour than a soapbox or pulpit. But what was our idea of a parlour? A sort of outer sitting- or living-room, we thought – inviting, yes, but rather formal, and offering not so much statements as hints about the inner lives and passions of a household, for which it served as a sort of shield. It was mostly furnished in conformity with the taste of the era, epitomised by an ornamental, straight-backed chair. This is not to say that we think of blogs as typically stuffy or prissy – only that most bloggers are on sites hosted by the likes of WordPress, Blogger or Tumblr, using designs and organisation schemes that these hosts supply, which closely reflect contemporary taste.

But what of the original parlour, we wondered. The Wikipedia entry had this surprise – borrowed from the Oxford English Dictionary:

Parlour derives from the Old French word parloir — or parler (“to speak”), and entered English around the turn of the 13th century. In its original usage it denoted a place set aside for speaking with someone, an “audience chamber”.

We got curious, and dug further into ideas about the purpose parlours had served in the past. Should we forget all about Victorian parlours, now that we knew that they were relatively recent evolutions of a much older idea?

The parlour was of considerable interest to the Victorians … and it appears in Victorian genre painting and fiction as a newly significant space … [T]he parlour, whether in life or in art, is a site at which we can explore potentially explosive disturbances in psychic and social fields and can trace attempts both to articulate and resolve such differences.

Curiouser and curiouser. Very much like blogs, then – if Thad Logan’s suggestion is warranted, as we intend to find out when we read her book.