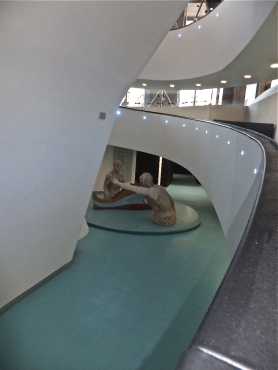 Surrealism. Surely, the art movement for our time.

What other tradition in image-making supplies better backdrops for recent events in — say, the dance between media and human life?

On that subject, we are making quick notes about what we know we will find impossible to believe without them, at some future date:

Item 1: a well-known columnist and ex-editor, Simon Jenkins, howls in outrage about facts twisted to heighten the drama in two feature films inspired by recent history.

His opinion on the subject matters. He has been chosen as a special adviser on decisions related to future press regulation, the focus of governmental negotiations with newspapers in the wake of the Leveson Inquiry. This is an appointment that, for reasons deducible below, amounts to giving the machine-wrecking Ned Ludd of Luddite fame a job as factory foreman.

Simon says, about two new films, Argo, whose subject is the escape of U.S. diplomats from Iran in 1979, and Zero Dark Five, a dramatisation of the military operation that killed Osama bin Laden:

Makers of films captioned as “true stories” claim either that fabrications do not matter as they are “just making movies”, or that they are justified in a higher cause. Yet they can hardly be both. Cinema in my view is the defining cultural form of the age. It deserves to be taken seriously, and therefore to be criticised for shortcomings. If the most celebrated of “docudramas”, Spielberg’s Schindler’s List, could go to lengths to authenticate its storyline, why should not any film claiming truth to history?

This is an intrinsically odd objection. The tradition of pretending to tell the truth in the service of art goes back as far as the book considered by some authorities to be the first novel, in the West, Don Quixote (originally, The Ingenious Gentleman Don Quixote of La Mancha; 1605). Miguel de Cervantes, the author, pretended to be merely the translator of an actual historical record of Quixote’s adventures by a Moorish scribe, Cide Hamete Benengeli. The exhausting true title of the book most of us know as Robinson Crusoe (1719) is The Life and Strange Surprising Adventures of Robinson Crusoe, of York, Mariner: Who lived Eight and Twenty Years, all alone in an uninhabited Island on the Coast of America, near the Mouth of the Great River of Oroonoque; Having been cast on Shore by Shipwreck, wherein all the Men perished but himself. With An Account how he was delivered by Pirates.

A delightful essay about Daniel Defoe’s winking invention of Crusoe — unrelated to the subject of this blog — appeared in The Wall Street Journal a few days ago. It describes critics complaining about Defoe ‘going too far in in creating the novel’s solid sense of actuality’. But that is irrelevant to its status in posterity. The essayist, Danny Heitman, is hardly isolated in declaring that ‘the book’s most abiding message is its affirmation of literature itself.’

Item 2: the same journalist, Simon Jenkins, foists a bizarre reality-distortion field on readers every time he writes about internet culture and our increasingly computer-permeated lives.

Against ever-longer odds, he strains to persuade us in elegant prose that we are well on our way to post-digital life. Is he joking? Apparently not, as he goes to pains to present curious factoids for substantiation — for instance, these:

A mild sensation was created this summer by the revelation that Google, Apple and Yahoo executives were sending their children to California’s Waldorf schools, where computers are banned. The masters of the e-universe appear convinced that computers “reduce attention spans and inhibit creative thinking, movement and human interaction”. Classes have reverted to using blackboards, chalk, pens, paper, books and even teachers.

Post-digital is not anti-digital. It extends digital into the beyond. The web becomes not a destination in itself but a route map to somewhere real.

Really? How many children were involved in this trend supposedly sweeping Silicon Valley? An inconsequential sub-fraction — according to one blogger’s good humoured evisceration of the non-evidence in an excellent post on Papyrus News about the rather less overblown report in The New York Times on which Simon was apparently leaning:

The article [mentions] four Silicon Valley firms: Google, Apple, Yahoo, and Hewlett Packard. Between them, those firms have tens of thousands of employees, with tens of thousands of children. A total of 294 children go to the Waldorf School (not all of whose parents work in high-tech industries). Does that mean that 99% of employees in high-tech firms believe that computers do have a role in education?

Nowhere are classrooms ‘reverting’ to chalk and blackboards. In the very week in which Simon wrote his screed, the most-discussed news in education was the explosion in disembodied learning through online courses offered by universities like Stanford and internet tutoring in maths and science for school children.

Nor has he yet produced a single convincing argument or anything resembling a fact to support his prediction of a transition to ‘post-digital’ existence — now mentioned by him in at least three columns.

In 2009, he announced — and was congratulated by several naive commenters for his revelation — that there was a reason why ‘the ghost of Gutenberg’ was about to ‘die laughing.’ And why was that? According to Simon, a new venture was downloading text from the internet and selling on the streets of San Francisco a publication called The Printed Blog. Lo! he crowed triumphantly, ‘[F]or the Jeremiahs who tell me that I and my medium are doomed to litter the fish-shop gutter, I have news. . .’.

If nothing was heard of this thundering victory before he wrote his column or since, it is because there never was any such publishing exercise in San Francisco. You might imagine that either he or his editors should have discovered that themselves — simply by checking, a basic act in journalism — for the column grandly titled ‘Old is new. Even Gutenberg’s ghost has returned to live in Silicon Valley.’ (N.B.: a detail: San Francisco is not and never has been considered a part of the cradle of high technology.)

Yet, last weekend, there was Simon himself playing scolding schoolmaster,

Fiction may be free and facts expensive, but film-makers are not short of researchers. Commentators may be accused of choosing facts to prove their opinions – plague the thought – but that is different from falsification. Nor do they excuse lies as higher truth. The licence to report carries responsibilities.

Item 3: a judge cites the fictional spy James Bond’s wide renown to justify a real-life decision unfavourable to chiefly female petitioners treated by undercover police as sexual prey. Some of these policemen had children by the women, even five-year relationships with them, then disappeared without a trace.

In a column last week, Jonathan Freedland recorded with fully-warranted fury that

Mr Justice Tugendhat […] ruled on whether a case brought by 10 women and one man duped into fraudulent relationships by undercover police officers should be heard in open court or in a secret tribunal.

The decision hinged on whether the law governing agents of the state allows them to form sexual relationships with those they spy upon. The good judge believes that when MPs wrote the Regulation of Investigatory Powers Act (Ripa) in 2000, permitting undercover police to form “personal or other” relationships, they must have meant it to include sexual relationships. After all, the legislators were bound to have had one particular secret agent in mind. “James Bond is the most famous fictional example of a member of the intelligence services who used relationships with women,” Tugendhat declared, lending “credence to the view that the intelligence and police services have for many years deployed both men and women officers to form personal relationships of an intimate sexual nature”.

Those involved tell of deep and genuine attachments, the men integrated into their lives as partners, living together, travelling together, attending family gatherings, sitting at a parent’s bedside, even attending a funeral.

[T]his was the hacking of people’s lives, burrowing into the most intimate spaces of the heart in order to do a job, all authorised by the police. It is state-sanctioned emotional abuse …

Such horror was nearly as hard to believe as Simon Jenkins’s assertions that print was on its way to re-capturing eyeballs lost to screens, or that computers were on their way out of education — only it was actually inflicted on real people.

Item 4: a teacher of the storyteller’s art complained in The New York Times, a fortnight ago, that most of his students were no longer capable of constructing narrative fiction that made sense of the world.

That will hardly surprise any reader who has reached this paragraph of our post. The teacher, Steve Almond — whose splendid essay deserves to be read in full said, in part:

About 10 years ago, in creative-writing classes I was teaching, I began to encounter a particular species of student story. The hero was an unshaven man who woke in a strange room with no idea where he was or why. Invariably, something traumatic had happened to him, though he didn’t know exactly what. The rest of the story sought to reconstruct his arrival in these dire circumstances, via scenes that had been chronologically mutilated for maximum profundity.

My standard reaction to such pieces was to jot earnestly flummoxed queries in the margins like “Where are we?” and “Is it possible I’m missing a page?”

The underlying … question is whether the story of our species — the greater human narrative — has simply become too enormous, too confused and terrifying, for us to grapple with. This might explain why so many of us now rely on a cacophony of unreliable narrators to shape our view of the world and ourselves …

… So, to summarise these jottings in reverse order: people whose job is to tell stories have given up on trying to make sense; judges justify police mistreatment of citizens, citing figments of a novelist’s imagination as proof of societal sanction for it; a journalist prone to presenting wild invention as fact admonishes spinners of screen fantasies for not doing what is supposed to be his job — strict adherence to the truth.

There is an ancient Hindu conception of the world as all-maya — which means, illusion.

There was a time, not long ago, when it was hard to understand.