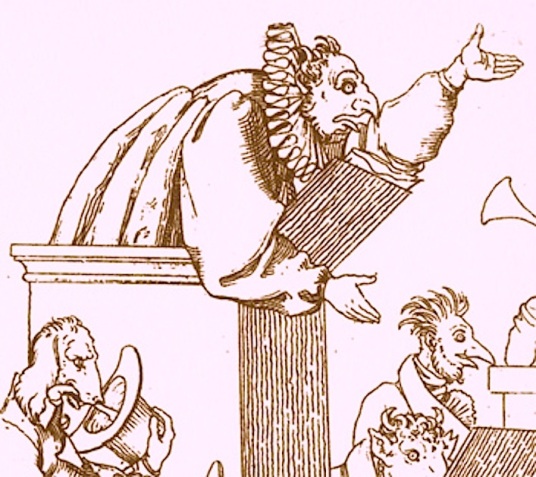 Caricature of a pompous, power-mad cleric, the kind Pope Francis is doing his best to eliminate — by the supremely anti-clerical Martin Disteli (1802-1844)

The astonishing Argentinian Pope Francis, who is 78 and breathing with only one lung, does not expect to live long – hence is racing to do all he can, as fast as possible, to rid the Vatican of bureaucratic arteriosclerosis, closed minds, meaningless pomp and display, factionalism and infighting.

All this we have learnt from the outstanding profile that emerges from assessments of three new biographies by Eamon Duffy, writing in The New York Review of Books.

We tend to think of the young as the most obvious campaigners for radical change; as its natural leaders. But if you stop to think about it, old radicals are far more impressive. They have a lifetime’s experience of discouragement of challengers of the status quo — often, by the extremely nasty and powerful. They have heard all the very best reasons for leaving things as they are — ad nauseam.

For those of us frustrated by the pace of media’s post-Gutenberg revolution, the Duffy essay – certainly no hagiography, with its extended passages about the pontiff’s flaws and failures – was a bracing and encouraging read. Not least, about life’s capacity to surprise us. Think of the size of the institution the Vatican manages. In 2011, the Catholic Church had 1.2 billion members, tended to by 413,418 priests. Think of its age. It is two thousand years old. Age and size are typically justifications for intertia – or no change at all.

Extracts from ‘Who Is the Pope?’ The New York Review of Books, 19 February 2015 (with highlights for unrepentant skimmers):

…[A]bove all, Francis is the first pope to embrace wholeheartedly the Second Vatican Council’s aspiration for a church in which authority is shared among the whole episcopate, rather than monolithically focused in the papacy. At the end of the council in 1965, Pope Paul VI had established a permanent Synod of Bishops as a forum for continued collaboration between pope and bishops. Many saw the synod as the major expression of “collegiality” that would devolve much of the decision-making of the Roman Curia to the bishops in synod and through them to the local churches.

Such hopes proved illusory: the Roman authorities saw to it that the synod remained a powerless talking shop with no independence or initiating power. Bergoglio shared the general episcopal dissatisfaction with this situation, and as pope, in one of the most striking passages of Evangelii Gaudium, he has called for “a conversion of the papacy” on such matters. John Paul II, he reminded his readers, had invited suggestions for a renewal of the papal office to make it more visibly an office of service, but “we have made little progress in this regard.” The papacy and the central structures of the Church must heed the call to “pastoral conversion,” because “excessive centralization, rather than proving helpful, complicates the Church’s life and her missionary outreach.” In particular, Francis insisted, there had been a failure to realize a truly collegial spirit within the church, and episcopal conferences needed to be given “genuine doctrinal authority.”

He has proved as good as his word. Opening the Synod on the Family in October 2014 that, among much else, dealt with the fraught issues of sexuality, contraception, divorce, and remarriage, Francis encouraged the bishops to express their views frankly. No one should be silent or conceal his true opinions, “perhaps believing that the Pope might think something else.” To do so would be a failure in “synodality, because it is necessary to say all that, in the Lord, one feels the need to say: without polite deference, without hesitation.” These were not empty platitudes: under John Paul II and Benedict XVI open questioning of official positions was routinely branded as “dissent,” and bishops who deviated even mildly from the official line were subject to reprimand or removal. For a pope to encourage fearless public outspokenness among the bishops was a startling novelty.

… On the one hand there was the temptation to “hostile inflexibility,” of “wanting to close oneself,…not allowing oneself to be surprised by God, by the God of surprises,” clinging to “the certitude of what we know.” This was the special temptation of the zealous, and the so-called “traditionalists.” On the other hand he warned against “a destructive tendency to do-goodism” (buonismo in Italian) that “in the name of a deceptive mercy binds the wounds without first curing them and treating them; that treats the symptoms and not the causes and the roots.” This, [he said], was the special temptation of the “do-gooders,” and of the so-called “progressives and liberals.” …

Though always meticulously respectful of his immediate predecessors, the differences between Francis and them are wide, deep, and, as his handling of the synod makes clear, momentous for the church. His distrust of religious leaders who “play Tarzan,” secure in their own certitudes, does not sit well with admirers of John Paul II or his style of leadership. Though he has commended the “prudence” of Benedict XVI’s rehabilitation of the old Latin liturgy, he is suspicious of the reactionary ideological freight that the Latin liturgy often carries with it, and he despises ceremonial pomp.

… he has abolished honorific titles and dress for the younger clergy working in the Curia, since for him priesthood is essentially about service to the poor and vulnerable, rather than a symbolic status or the exercise of sacramental power.

Perhaps most momentously, Francis has pointed the church away from culture wars with secular society that were such a feature of Benedict’s papacy, toward a less confrontational approach to the social circumstances in which the faithful have to live, and a more fruitful reengagement with the church’s mission to the poor and underprivileged, in whom he sees both the natural and the most receptive hearers of the Gospel. Where Benedict was inclined to blame the increasing marginalization of Christianity in Western society on a collective apostasy rooted in the shallow materialism of secular modern society, Francis is inclined to attribute the corresponding decline in Latin America to the church’s own shortcomings:

… Francis himself is unlikely to have a long pontificate: he is an old man, with only one functioning lung. Both in Rome and in the dioceses of the world he has been quietly putting in place men who share his vision. But the announcement in January 2015 of his second consistory for the creation of new cardinals was anything but quiet, because the pope’s startling list of the twenty cardinals-designate, fifteen of them under eighty and therefore eligible to vote in the next papal conclave, represented a positive fanfare for Francis’s alternative vision of the Catholic Church.