Will judge Leveson become one of history’s heroes not for debugging and democratising the British press but his own profession — law and the courts? 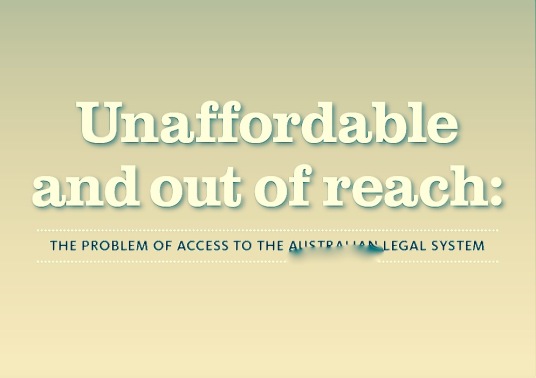 The conclusion of a 2012 Community Law Australia report is actually true everywhere in the English-speaking world
— image modified by postgutenberg@gmail.com

[ This is a long post — ‘Many cups of coffee!’ as Manne, a Finnish friend, once warned us in a preface to a letter. ]

We have been surprised to notice that an important but cautiously worded public lecture in London last November by the British judge so far referred to in this spot as Lord Justice Leveson has attracted almost no media attention. Our regular readers will remember that Leveson LJ — now correctly called Sir Brian Leveson, or LevesonP in legal shorthand, after a promotion (see footnote**) — led a government-ordered inquiry into the workings and ethics of the British press nearly five years ago.

Remarks at the start of this exercise by the Lord Chief Justice who appointed Leveson LJ to his inquisitorial post led some of us to hope that, at the inquiry’s end, the judge’s most famous prescription for improving Fourth Estate ethics and objectivity would be to open up journalism to wider public participation. In other words, that he would push for a democratisation of the press as radical as the mass dissemination of knowledge and learning that Johannes Gutenberg’s printing press permitted — not overnight or even in 50 years, but eventually, a point made in our last post.

Exactly why the inquiry failed to yield any such recommendation in spite of the strong nudge from the Lord Chief Justice is unclear. The most interesting possibility is the threat by enraged senior editors and journalists, as well as newspaper proprietors, to turn the tables and demand an equally alarming and humiliating investigation of lawyers and the legal establishment. In the lingering press anger about the judicial probe in 2013, one columnist, (Sir**) Simon Jenkins — a former editor of The Times and The Economist — barked that ‘Lawyers should stick to the law.’ One year earlier, as the Leveson hearings were in full, addictive sway, he noted that ‘Judges consider themselves institutionally beyond correction,’ adding delectably, ‘As for the fee-fiddling, court-delaying, job-sharing, ambulance-chasing antics of the legal profession, you will wait for Doomsday for a judge-led inquiry into that.’

Well, LevesonP might yet rise to the Jenkins challenge. On 12 November, speaking about the early stages of ‘substantial reform’ to ‘secure an efficient and effective justice system … fit for the 21st century,’ Sir Brian said that ‘Information technology is likely to provide the means by which we can do so.’ He spoke of a future with more frequent resolutions of legal disputes ‘other than by trial’; of ‘the development of an online court’; and of an ‘IT dependant system through which the courts can manage disputes so that they can be resolved appropriately.’

Ah. Appropriately. A careful, neutral word chosen by a supremely cautious justice, a signal understatement of the death blows that digitisation and sweeping procedural changes could deal the anciently entrenched customs and culture of lawyers and the legal system. The effects of these transformations, not just in Britain, will fall mainly into two wide, linked categories:

The richest countries in the English-speaking world have in common the lamentation encapsulated in Australia with the graphic above highlighting the dismaying fact recorded by Community Law Australia that ‘Repeated government and Parliamentary inquiries over the past decade have recognised that the legal system is out of reach for many Australians.’ That is stunning in a country whose people rank as the world’s wealthiest, or nearly so; a country famous for its militantly egalitarian ‘tall poppy syndrome’ culture, and surpassed only by the US in the availability of lawyers (357 vs. 391 per 100,00 people in the late ‘00s, according to a 2010 Harvard Law School study).

As for the US, in a joint contribution to The New York Times in 2010 titled ‘A Nation of Do-It-Yourself Lawyers,’ the chief justices of California — the US state with the world’s largest court system — and New Hampshire invited ‘members of the legal profession to join with us [in] making unbundled legal services and other innovative solutions — like self-help Web sites, online assistance programs and court self-help centers — work for all who need them.’

The legal profession’s incandescent reaction — across the globe — to all such proposals has been put bluntly by an antipodean judge at the highest tier, Deputy Chief Justice Faulks of the Family Court of Australia, who does not consider it a response to be condoned or indulged:

Most judges tend to couple the word self-represented litigant (SRL) with an expletive. It is customary to regard them as difficult, time-consuming, unreasonable, and ignorant of processes of the law. … [C]ourts should regard self-representation by litigants as a challenge rather than as a problem. … Self-representation has reached a level in many courts where it is common for at least one of the parties to be unrepresented for one half of the time. This means that courts are no longer dealing with a minority aberration but are being obliged to contend with change which may require altering the way in which courts operate.

TRANSPARENCY: LETTING THE PUBLIC SEE WHAT REALLY HAPPENS IN LITIGATION

Idealistic and naïve non-lawyers, litigation virgins who have always thought of trials and court procedures as instruments for uncovering the truth in any legal battle, are in for a rude shock when they get enmeshed in an actual case. Honest judges will explain that a trial is not a quest for truth. Why is this a fact of which even highly educated people are mostly ignorant? Most litigation, especially civil litigation — which has no celebrity murderers or Scott Turow thrillers about corrupt judges to supply education-by-entertainment — happens in the dark, out of public view. No stranger to the process has any conception of the brutal details of how legal action commonly amounts to the licensed bullying of those with less money by those with more — or is capable of grasping the near-universal truth of what Chief Justice Faulks has said, with a symbolic illustration from Australian court procedure:

The legal profession is one which guards its turf jealously. To an SRL, being in a court room feels somewhat like being in an old-boys’ club where members of the club are speaking to each other in a strange language known only to them, where the members know each other quite well and are disparaging and discouraging of interlopers. … Most judges prefer to have a triangle of dialogue that involves a judge and two lawyers, preferably counsel, at the Bar table. In my opinion this is a perpetuation of the “old boys club”-like environment associated with litigation. … [I]f courts remind themselves that access to justice requires that it should be to all “without fear or favour, affection or ill-will” then it follows that we should place all of our processes, language, practices and assistance under the microscope of that access to justice …

Simon Jenkins’ counterattack on lawyers and judges in the UK arose from fears about the endangerment — implicit in the inquiry’s remit — of the independence of the Fourth Estate; of its special privileges; and of its ability to restrict membership. In his Guardian column two months ago about technology forcing all professions to kneel before the transformation of their work by the internet — mostly, by demystifying their expertise and supplying open access to their tools and knowledge — he quoted Bernard Shaw’s trenchant take on the professions as ‘conspiracies against the laity’.

Doctors and lawyers were the chief focus of his commentary, which strangely made no mention of the need for traditional journalism to adapt to the arrival of ‘citizen journalists’ or ‘citizen bloggers’. Whether the recommendations of the Leveson Inquiry have had or will in the future have any significant role at all in reshaping press practices is impossible to tell from our perch seven thousand miles away. The scant coverage of this subject by the British press is contradictory with, for instance, the Daily Mail implying last month that proceeding with the second stage of what was set as a two-part investigation would be an even bigger waste of resources, whereas the Independent drew attention to the new press watchdog to which the Inquiry gave birth, and said that it ‘has started to show its teeth’.

A LevesonP who sets an example with a more vigorous mucking-out of his own profession — which happens to be the one most successfully insulated from change — will be a judge for the ages. He certainly seems to have grasped the unfairness of a profession least affected, so far, by the digital juggernaut, imposing more revolutionary change on one so battered by internet publishing’s destruction of its economic viability that the most representative image of its state would be a stage strewn with corpses from which just a survivor or two limps away, in the final act of a tragedy.

Richard Susskind, the British judiciary’s principal adviser on digitisation for nearly 18 years, has been pegged by the American Bar Association as ‘far and away the best analyst and predictor of the evolution of the legal marketplace.’ His slender book, Tomorrow’s Lawyers, a model of concision, is gripping essential reading with a well-earned conclusion:

[T]he law is no more there to provide a living for lawyers than ill health exists to offer a livelihood for doctors. … [T]here is an opportunity to be involved in shaping the next generation of legal services. You will find most senior lawyers to be of little guidance in this quest. Your elders will tend to be cautious, protective, and conservative, if not reactionary. They will resist change … In truth, you are on your own. I urge you to forge new paths for the law, our most important social institution.

**In an exception to our usual practice of ignoring titles awarded in Britain’s honours system — in a blog written outside any national boundaries — we refer to him in this post as Sir Brian Leveson, though it was as Lord Justice Leveson that he supervised the hauling over the coals of some newspaper proprietors and editors who were undoubtedly burning him in effigy, out of sight, in revenge. We used that title in our posts about the Leveson Inquiry because it was not a so-called gong or decoration, but part of his job description. Though peers (‘Lord’) rank higher than knights (‘Sir’) in the hierarchy of honours, Sir Brian has not been demoted, since then: he was a Lord Justice simply because that is what judges of the Court of Appeal are called.

Explaining the reasons for that would call for an even lengthier exposition than if we were to try to explain why, since his elevation from that position to his new job as president of the Queen’s Bench Division of the High Court of Justice, or Britain’s third most senior judge, he wears a black gown with a ‘short wig’ to hear criminal cases, but a ‘full wig’ on ceremonial occasions — when justices at the very top of the top, in the UK Supreme Court created just ten years ago, do not usually appear in gowns or wigs, but on ceremonial occasions, wear gowns but no wigs. (Impossible! you say? See the Wikipedia entries for Judiciary of England and Wales and Judiciaries of the United Kingdom.)

We are following law reporting practice when we refer to LevesonP, for shorthand.