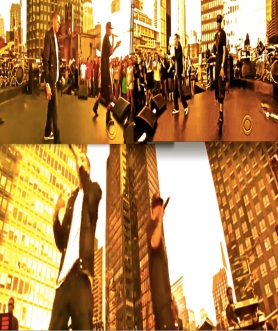 Jay Z explaining on Youtube what should be obvious, in our view — that rap is poetry

Quotation highlighted in the print edition of a venerable newspaper last Sunday:

‘The content creator should be compensated. It’s only fair.’

Jay Z … whose subscription streaming service, called Tidal, will be majority-owned by artists …

On Monday, Jay Z, the rap star and entertainment mogul, announced his plans for Tidal, a subscription streaming service he recently bought for $56 million. Facing competition from Spotify, Google and other companies that will soon include Apple, Tidal will be fashioned as a home for high-fidelity audio and exclusive content.

But perhaps the most notable part of Jay Z’s strategy is that a majority of the company will be owned by artists. The move may bring financial benefits for those involved, but it is also powerfully symbolic in a business where musicians have seldom had direct control over how their work is consumed.

“This is a platform that’s owned by artists,” Jay Z said in an interview last week as he prepared for the news conference announcing the service. “We are treating these people that really care about the music with the utmost respect.”

On that same last day of March, Charlie Hebdo staff members bent on turning their weekly into a cooperative were conspicuously running up their rebel flag again – in an opinion piece about the paper’s future published in Le Monde — France’s closest equivalent of The New York Times.

Extract (a free translation, of which post-Gutenberg will gratefully accept correction and refinement):

Charlie must go on, … and stay true to the values ​​in its DNA, and the spirit of its founders … [retain] complete political and financial independence, with shareholding restricted to employees of the newspaper, to the exclusion of outside investors and advertising influence, defending an alternative economic model …

What would best guarantee Charlie’s continued freedom of thought and expression?

A flat organisational structure (architecture). By using a form of cooperative society that we have discussed internally for years — directly in line with the social economy Charlie has always advocated — the newspaper must give up its status as a commercial enterprise. By giving each of us the right to take part collectively in decisions affecting the newspaper, … and to be involved in rebuilding what is so much more than a mere employer, to us.

… We have heard that a new ownership structure is being designed, excluding us.

… We refuse to let our newspaper become tempting prey, or be made the object of political and/or financial manipulation, we refuse to allow a few individuals to take partial or complete control of it, with absolute contempt for those who produce and support it.

So, is this zeitgeist, genuinely the spirit of a new era, on display — at a French satirical magazine, and in New York, in the words of one of the most successful popular musicians alive — or a mere coincidence?

As noted in our last post, in sympathy with the would-be Charlie Hebdo reformers, we love the idea of a staff-owned or, in the case of Tidal, musician-owned cooperative — but would be even more delighted by a structure that allowed readers and audience members to become shareholders and co-owners.

A cooperative owned only by creators risks becoming like the medieval craftsmen’s guilds, of which the Cambridge historian Sheilagh Ogilvie has written:

Half the population was inherently excluded, since very few guilds allowed female members … Most guilds also excluded Jews, bastards, migrants, laborers, farmers, propertiless men, former serfs and slaves, gypsies, members of other guilds, adherents of minority religions, men of “impure” ethnicity, and those who couldn’t afford the admission fees. As one nineteenth-century Spaniard put it, those without funds “called in vain at the door of the guild, for it was opened only with a silver key”.

Guild membership was reserved to a privileged minority, even in towns.

Originally, guilds helped skilled artisans to earn respect, liberating them to different degrees from feudal lords and serfdom — but then they themselves became too powerful and exclusionary.

Let us hope that Jay Z – who launched himself, producing and promoting his own music after he was rejected by the gatekeepers of corporate recorded music — can stay true to his mission, as in this re-affirmation and blast at accusations that he has sold out and given up on revolution:

Motherfuckers say that I’m foolish I only talk about jewels

Do you fools listen to music or do you just skim through it? …

… Just read a magazine that fucked up my day

How you rate music that thugs with nothing relate to it

I help them see they way through it, not you

Can’t step in my pants, can’t walk in my shoes

Bet everything you’re worth, you’ll lose your tie and your shirt …

[ Late addition: support for an impression of growing disenchantment with hierarchy as a form of organisation came from a surprising source, yesterday. Never mind if it only amounts to a single ‘data point’ — in a short essay by a pilot-turned-architect reflecting on the Germanwings plane intentionally crashed in the Alps earlier this week. See footnote. ]

If ever arguing about a proposal seemed superfluous – because a kindergartener could convince the child on the next play stool of its merits – that would be true of the insistence, by staff members who survived the massacre at Charlie Hebdo, that they deserve ownership stakes in the agent provocateur newspaper, as they risk their lives by carrying on after the bloodbath. An item in The Wall Street Journal last week said:

Some staff members live under round-the-clock police protection, with armored policemen wielding automatic weapons stationed in front of their homes.

Making a paper’s workers co-owners is going only halfway towards what post-Gutenberg sees as a necessary bow to the egalitarian spirit of net-centred life – rejecting hierarchies in favour of structures that value every contribution to the welfare of the enterprise.

Including readers and commenters as co-owners would be even better — certainly do more for economic stability and growth — if enough thought and care were put into adapting the rules and culture of organisations to make sure that efficiency was preserved.

But at Charlie Hebdo, even politically radical major shareholders have, so far, declined to let staffers share the tidal wave of cash flowing into the paper’s coffers – nearly £22 million, since the jihadist attacks on 7 January.

That is, … as far as we can tell. Updates on the dispute are hard to come by because the most famous names in journalism tilting left have been ignoring it altogether. Nothing in The New York Times or Guardian whatsoever, so far, unless we have been typing the wrong terms into search boxes. All the big brand-name papers on the political right have run reports, including three of Rupert Murdoch’s stars — The Times in the U.K., The Wall Street Journal in the U.S., and in his homeland, The Australian — as well as the Daily Mail and The Telegraph.

We are guessing that behind their straightforward news stories on the subject, right-wing editors are sniggering discreetly about idealistic leftie journalists at the French satirical weekly quarrelling about filthy lucre — while co-ownership is an awkward subject for their counterparts on the left, who know that it makes perfect sense, but cannot bring themselves to make any significant move towards it.

Eleven staff members have called for all employees to become equal shareholders in the magazine, setting them up for a battle with the current management.

Charlie Hebdo is currently 40 percent owned by the parents of Charb, the former director of the magazine who was killed in the January 7 attacks, 40 percent by cartoonist Riss, who is recovering in hospital from shoulder wounds and 20 percent by joint manager Eric Portheault.

But one of the Charlie Hebdo journalists, Laurent Leger, stunned the editorial conference on Wednesday by announcing the creation of a group to open talks on an equal division of the magazine’s capital.

…[H]e said in [a] letter that a more equal division of the funds would allow more “transparency”.

“The wider the control, the more decisions will be taken collectively and that’s better for everyone,” … **

There was an echo of Leger’s words in a post on the website of Harvard’s Nieman Journalism Lab — ‘In media companies, the editorial staff shouldn’t be kept in the dark about finances’ — by Celeste Lecompte, a senior manager at Gigaom, an online American publisher specialising in blogging about technology, which abruptly went out of business earlier this month:

Our industry is undergoing incredible changes, and finding a way to thrive amid the new economic and technology context is critical …. Managers with direct budget responsibility tend to focus on meeting goals and targets in the short term. But when other employees have access to this information, they can contribute to the conversation in different ways, supporting and critiquing strategic efforts.**

If a co-owned Charlie Hebdo emerges from horror of eleven staff members murdered in plain sight, that will be at the top of the class of unlikely geneses – just right for now, with T. S. Eliot’s cruellest month getting ready to breed, from land seemingly beyond resurrection, its improbable lilacs …

Something else in that category, and in the realm of publishing — only a long time ago, in 16th-century Venice, is the life of a co-inventor of italic type. At post-Gutenberg, we find the typeface useful, but would list, at the top of reasons why we have never much liked it, that it is irritatingly spidery and insubstantial and dainty-bordering-on-effete. So. Who collaborated, dear reader, with Aldus Manutius – an early printer, in the Gutenberg hall of fame — in the creation of italics? The answer, a small feast of the bizarre — in a review of an exhibition devoted to Aldus in the NY Times last month — is that he was …

… the type cutter Francesco Griffo, a shadowy fellow who broke with Aldus acrimoniously and then slugged a man to death with an iron bar before reputedly meeting his own demise at the end of a hangman’s rope. Italics, which were intended to mimic the humanist handwriting of the day, first appeared in a modest five words in a 1500 edition of the letters of St. Catherine …

** After we posted this entry, we read an essay by Andrew McGee in The New York Times that — incidentally — made the same point as Laurent Leger and Celeste Lecompte in another sphere – airline safety:

In the 1960s and ’70s, several crashes were judged primarily a result of pilot error, some stemming from the hierarchical relationship between the captain and the co-pilot. Co-pilots were often afraid to challenge the captain’s decisions, and the results could be disastrous. In training, they played us a cockpit voice recording of a co-pilot timidly telling the captain they were running out of fuel; he didn’t mention it again before the engines flamed out.