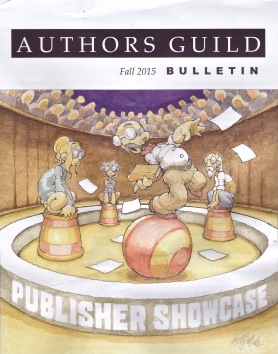 Cover of the autumn 2015 Bulletin of the American Authors Guild: ‘Should Writers Be Performers?’
— Cover artist: Kevin Sanchez Walsh, kswradiographic [at] gmail.com

For months — as much as a year, perhaps — we have seen no new ideas for economic structures for post-Gutenberg publishing, the turn-of-the-decade preoccupation of many an anxious scribe, and the topic that launched this blog. Then we read the dire news of a ‘business model’ that a well-known large publisher has begun to offer authors. Fittingly, this was in a masterpiece of sardonic rage in the Books and Bookmen column of a satirical magazine, Private Eye (No: 1412; 19, February 2016). We will spare our readers the chore of looking up the Latin derivations of ‘libor’ – from libare or ‘sacrifice,’ or liborius, ‘free’, according to the Wikipedia. (But do scroll down this blog entry** to note the most interesting overlap with one Latin word for book — not codex, of course.)

With the vast majority of published authors earning below the minimum wage, one major publisher has found a way to give them even less — and indeed land them with a five-figure bill, in a scheme that owes more to vanity publishing than to the normal commercial author/publisher relationship.

Publisher John Wiley, which issues the popular ‘… For Dummies’ series, is telling writers its ‘business model has changed over recent months’. Out goes the advance on royalties. In comes an author commitment, ‘at the outset’, to buy ‘a minimum quantity of approximately 1,500-2,000 copies over the course of a three-year period’. For 2,000 books, even with an author discount, this adds up to nearly £13,600.

And out goes the writer looking to the publisher to help promote the title. In comes ‘author commitment in terms of promotion of the book at speaking engagements and training events’. This means the writers selling their own books, or as Wiley puts it, ‘purchasing discounted copies for events/business use/training courses to make our products viable’. An author selling 2,000 copies would make £19,200 — less costs involved in the ‘events’.

No mention of the cost of researching and writing the book, or the fact that some authors aren’t physically able to be travelling sales reps. These requirements will mean that most authors can only afford to write if an employer sponsors them with time, event organisation and the cost of buying their own books.

Take the (imaginary) Libor for Dummies. It would be hard to find an independent author with the ability or money to follow Wiley’s new business model. But there are plenty of bankers who could write this title from their employer’s point of view, and promote it with the bank picking up all the tabs. Which would make the book financially viable — and simultaneously worthless.

At last someone with a powerful megaphone has spoken out about the absurdity of trying to turn all scribblers into salespeople, on social media or anywhere else. Roxana Robinson, the president of the Authors Guild in New York — and author of a sensitive and perceptive biography of the painter Georgia O’Keeffe, for which we were long ago proud to make room on our shelves — is pointing out what we did in an early entry in this blog, when practically no one was publicly challenging the near-universal conviction that writers have no alternative to morphing into performing fleas. It has been one of our most popular posts — without having any discernible effect, so far:

How would introverts like Beckett — and Wittgenstein, Kafka and P.G. Wodehouse — have survived social media?

This is part of what the Authors Guild leader said on virtually the identical subject a few months ago:

Promotion is the opposite of writing. It’s depleting. And this kind of ‘creative’ promotion, is an act of desperation.

You can’t be a writer while you are onstage, answering questions. The only place where you can be a writer is alone with your mind, answering the questions that come from yourself, the ones you can reconsider, shift and re-phrase, until you find yourself heading out alone into the ranges you want to explore. Most writers are not performance artists. When we’re in public, we’re not writing. When we’re writing, we’re not in public.

… Moreover, if you’re not well-known, none of these strategies of self-promotion is useful. No one will pay money to see an unknown writer.

That’s called division of labor, and in the world of economics, it’s quite highly thought of.

If only writers could go on strike …

Imagine a writer straining hard to stay immersed in a narrative unfolding in her mind — a scene set in the Milanese autumn — because she has to keep showing up on social media to tweet about spring
— Statue of the Italian Unification leader Garibaldi on horseback: photograph by MIL22

Not at home, yet not exactly travelling, post-Gutenberg offers in this week’s entry a few more reasons for deep bafflement by the sanguine acceptance, in some surprising places, of the idea that writers who are retiring, introverted moles — a large proportion, if not most members of the breed — must transform themselves into booming glad-handers and performers on social networks and lecture podiums, or face failure and inevitable extinction. Quoting The Economist’s Schumpeter column again:

… Last month Simon & Schuster, a publisher, announced it would sell online video courses led by some of its authors. Things are more difficult for fiction writers: the organisers of conferences and other events pay good speaking fees to non-fiction writers with a bit of name recognition, but not to the average novelist.

The 20th-century American novelist John Gardner thought more comprehendingly and revealingly about the essence of what makes a writer, and how writers work, than almost anyone else who has pronounced on this subject. Read these two sets of extracts from his wise, beautiful paragraphs on ‘The Writer’s Nature’ and do, please, post a comment here if you can work out how any of the qualities he describes fit the conformist — anything-for-a-‘like’ — thinking and harmony on social platforms:

… As for the quality of strangeness, it is hard to know what can be said. There can be no great art, according to the poet Coleridge, without a certain strangeness. Most readers will recognize at once that he’s right. There come moments in every great novel when we are startled by some development that is at once perfectly fitting and completely unexpected … One has to be a little crazy to write a great novel. One must be capable of allowing the darkest, most ancient and shrewd parts of one’s being to take over the work from time to time.

… If I could explain what I mean here, I could probably do what I think no one has ever done successfully: reveal the roots of the creative process. The mystery is that even when one has experienced these moments, one finds, as mystics so often do, one cannot say, or even clearly remember, what happened. In some apparently inexplicable way the mind opens up; one steps out of the world. One knows one was away because of the words one finds on the page when one comes back, a scene or a few lines more vivid and curious than anything one is capable of writing – though there they stand. … All writing requires at least some measure of trancelike state: the writer must summon out of nonexistence some character, some scene, and he must focus that trancelike state in his mind …

… After verbal sensitivity, accuracy of eye, and a measure of the special intelligence of the storyteller, what the writer probably needs most is an almost demonic compulsiveness. No novelist is hurt (at least as an artist) by a natural inclination to go to extremes, driving himself too hard, dissatisfied with himself and the world around him and driven to improve on both if he can.

… By the nature of the work it is important that one way or another the novelist learn to depend primarily on himself, not others, that he love without too much need or dependency, and look inward (or toward some private standard) for approval and support. Often one finds novelists are people who learned in childhood to turn, in times of distress, to their own fantasies or to fiction, the voice of some comforting writer, not to human beings near at hand. This is not to deny that it also helps a novelist finds himself with one or more loved ones who believe in his gift and work.