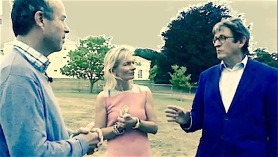 Lionel Barber (left) of The Financial Times interviews Alan Rusbridger (right), who led The Guardian for 20 years, and Zanny Minton Beddoes (centre) of The Economist. The sinister dark mass behind them could be the Facebook-shaped digital juggernaut they are discussing with commendable calm.

In the outline of his unfinished manuscript about the difficulties of constructing accurate history — partly scratched out as a prisoner of Germany in 1940-4 — the French historian and Résistance operative Marc Bloch wrote [ the italics are his, in all cases ] :

By way of introduction: the generation of skeptics (and scientists)

1. The idea of cause. The destruction of cause and of motive (the unconscious) [ … ]

3. The problem of the individual and his differential value. [ … ]

4. The problem of ‘determinant’ acts or facts.

All three versions of his manuscript ended with these words: ‘In history, as elsewhere, the causes cannot be assumed. They are to be looked for …’. If he were extending those notes today, we would propose:

5. The problem of the sound byte and tiny attention spans.

Explanations shrunk to sound bytes can wreak havoc with historical truth. That would account for the hair-raising contrast between our analysis — two posts ago — of why The Guardian’s economic model of giving everyone free access to its website is unsustainable, and the answer to virtually the same question by the architect of its strategy, Alan Rusbridger. That prospective revolution failed because it was halted halfway, as if lacking the courage of the convictions that got it rolling — including the editor’s enthusiasm for the advent of ‘participatory journalism’. But he and his managerial colleagues did not go far enough. For old media in transition, free access can only make economic sense — some day — in combination with building in some version of the audience participation or collaboration that defines social media. Recently, the post-Rusbridger Guardian made a stunning turn in the wrong direction. As we noted on this blog last month, relying on the accuracy of a report by Private Eye, the paper’s present leaders decided — unbelievably — against allowing its new class of readers paying £5 a month for ‘membership’ privileges to elect a representative on the paper’s governing board, the Scott Trust. (‘Readers’ Knives,’ Private Eye No: 1422, 8-21 July, 2016)

You would glean none of that from Rusbridger’s reply in an interview with the editor of The Financial Times — at this newspaper’s first ‘live’ festival in London earlier this month — to a question about the explosion in readership after the launch of his content-is-free business model:

Lionel Barber: Under your editorship The Guardian became incredibly successful in terms of developing a global audience. You went from 300,000 in the UK to literally millions. Can you make money out of that audience?

Alan Rusbridger: Well, the answer to that changes from year to year. At the time I left, we were just about managing sustainability and then everything changed — not through anybody’s fault. Except that Facebook came along and this behemoth started taking 85 cents out of every dollar in terms of the advertising revenues that came in. And that’s a completely changed environment. There’s no point whingeing about it, it’s a brilliant company. Google’s a brilliant company. But it does mean you have to adapt your business model not only in light of things that may change from year to year but from month to month.

The facts called for giving the FT editor a different sound byte altogether. But that would have put the former Guardian chief, who stepped down last year, in the awkward position of criticising his change-resistant former colleagues for their inability to understand, as he did, digital technology’s inversion of the pyramid they were used to — with journalists at the top and their audience members squeezed together, powerlessly, at its base. He could have given a colourful, entertaining account of, for instance, the shattered egos of senior journalists and columnists subjected for the first time to criticism by readers in comments sections — and to competition from blogs. Instead, he expressed himself eloquently on the perceptions that made him a Moses who lost most of his followers, because they lacked any glimmer about the Promised Land to which he was trying to lead them:

I felt that my job was to try and understand the technology, not because it was technology but because it signified a completely different social shift. It was the biggest thing since Gutenberg — not the technology of printing but the democratisation of reading and of thought. And we’re moving from a vertical world in which the people with the knowledge used to drip it down to something in which it’s much more widely dispersed. And as editors, you can’t afford to ignore that.

In their joint interview, Zanny Minton Beddoes, the practical editor of The Economist, described a survival strategy pegged to pushing for the replacement of advertising revenue by expanded circulation and subscriptions. This could succeed, for the special reason why publications focused on finance and economics are virtually the only big names in journalism that are doing well behind the paywall or subscription barrier. Her plan represents a different recognition that success will entail some kind of financial reward for the reader-participants in publishing’s future. The economic model that we have advocated on this blog would give readers small monetary stakes in media organisations. That would be just right for the communal-minded, left-leaning progressives said to dominate The Guardian’s audience. By contrast, readers are willing to pay for old-fashioned subscriptions to The Economist — or The Wall Street Journal or FT — in the hope of learning what they can to protect their piggy banks from disaster. (See ‘The Guardian wants to look like a Facebook extension, but the right model for a socially sensitive, reader-supported newspaper is either Private Eye or Tsū.co’.)

Surely a sound byte encapsulating some of that would have been a more useful guide for editors coping with the digital transition than implying that the Guardian‘s huge economic losses are simply the fault of Facebook, which came along and devoured old media’s future.