German artists of the Renaissance, inspired by Italy, took off in other directions: ‘Venus and Cupid,’ Cranach the Elder, 1509

There is something wonderfully right about a son of Italy, Federico Faggin, being the designer of the ur-ancestor of the miniature electronic brains at the core of our computers, tablets, and every other intelligent device in our nearly all-digital, all-wired existence.

Italy was the first place in Europe to experience the damburst of transformative creativity we call the Renaissance. The worship of invention and innovation that defines Silicon Valley is easily traced across six centuries to Veneto, the region in which Federico, the architect of the first commercial microprocessor, was born in 1941– with today’s date on his birth certificate. Vicenza, the town on that document, is famous as the home and chief showplace of the work of Andrea Palladio, the most influential architect of the Renaissance and, experts say, Western architectural tradition. We have been amused to discover, in looking up his lifespan, that yesterday was Palladio’s birthday – in 1508.

None of these are connections we have ever heard anyone in Silicon Valley make – even if Federico is mentioned in the Wikipedia entry for Vicenza. Why, you might ask, do they need making? Why should geniuses frantically multitasking to design our collective future stop to trace the antecedents of their grand enterprise?

Well, we were dismayed by the green light a U.S. federal judge gave Google last month, which lets the search engine leader continue to scan and upload millions of books online. It can do this without paying living authors of any of those print originals a cent for the free access it gives any web surfer to sections of the texts. This, as Google insists and the judge accepted, is an important act of cultural generosity. All very well, we agree, until you consider that it allows Google itself, already one of the world’s richest companies, to grow even richer from selling advertising space in its vast library of scanned texts, Google Books – while making no contribution to easing the notorious financial uncertainty of book-writing, or reversing the comprehensive destruction by the digital revolution of too many struggling writers’ livelihoods.

Google’s defence for this seeming callousness is all tied up with the scholar Lawrence Lessig’s insistence – enshrined in the ‘free culture’ movement – that loosening copyright laws will permit more ‘sharing’ of artistic and original works and a flowering of collective creativity; conversely, that the enforcement of traditional copyright blocks such creativity.

Too many of his ardent disciples are also apt to parrot the notion that all creativity is ultimately derivative and builds on the work of others. Fair enough, until that truism is wielded as a club, justifying the smashing of an artist’s right to earn income from the labour of shaping derivative inspiration. This argument is particularly unwelcome from anyone working in, say, Google – famous for its ferocious secrecy about its equivalent of Coca-Cola’s secret recipe, the algorithms on which its search engine runs. These are thickly enmeshed in protective patents. There is incontrovertible proof of the company’s recognition of intellectual property rights – but only in its own sphere, technology, where it follows the conventions for acknowledging in cash its indebtedness for creative opportunities. Google has for years been paying royalties to Stanford, the university where its founders Sergey Brin and Larry Page developed the algorithm they used to set up shop – a total of $337 million so far.

If Silicon Valley-ites knew their history, would Lessig’s wish to dilute if not dismantle copyright have proved so popular? Technologists know enough about the importance of the Renaissance for Bill Gates to have snapped up Leonardo da Vinci’s Codex for $30 million in 1994. But do they realise that the expression of personal, individual creativity was the key to that revolution? That in the Renaissance, artists were liberated from the constraining group-think and rigid rules of minds enslaved to medieval church doctrine?

Giorgio Vasari, a painter of that era and also the first historian of Italian art is said by the historian John Hale to have looked for maniera – the manner in which an artist expressed himself, a novelty after the Middle Ages’ convention of anonymous stonemasons toiling on great Gothic cathedrals, humbly suppressing their individuality in the service of God.

That individuality was of the essence of the Renaissance was also discernible in the way each country – and individual artists in it – reinterpreted the marvellous innovations in Italy in its own way. As Hale put it, ‘Whatever was made in Italy in the fifteenth and sixteenth centuries … met two major obstacles: personal genius and shared temperament – the stereotypes of national character …’. This accounts, for instance, for the strikingly different treatment of the female subjects of the German painter Lucas Cranach (1442-1573), whose ‘Venus Restraining Cupid’ Hale calls ‘the first frontally nude goddess in German art.’

Technologists need to help artists to prosper from the expression of their individual visions. In the eight years Google spent fighting the legal battle over its book-scanning, couldn’t it have found a way to use its clout and brilliant inventiveness to establish micropayments as a way to compensate artists, writers and musicians – the way Amazon has taken online retailing from a futurist’s pipe dream to everyday reality?

… We must note in closing that in years of delightful conversations with Federico and his lovely wife Elvia – also born in Vicenza, and whom he considers indispensable to his achievements in Silicon Valley – he has never sought any reflected glory from the Renaissance, nor drawn any attention to Palladio’s stamp on the appearance of his birthplace. His modesty is exemplary. Still, we doubt that he would disagree with this entry in post-Gutenberg, his eldest child being not a technologist but a painter … of whom we will reveal just a little more, anon. 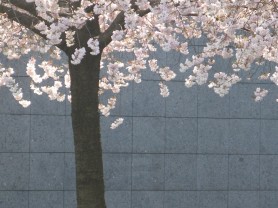 This helpless thing, lyric perception, is an authentic response to the world’s impossible contradictions which seem to resolve themselves, finally, as beauty. In fact, I believe that lyricism represents a form of courage, for it is the only response as thoroughly vulnerable as the jeopardized world itself is.

As more writers and artists without formal qualifications but with undeniable gifts find audiences for their work on the net, will micropayments finally take off?

By micropayments I mean fractions of €10 or $10 notes – or their equivalent – paid through a transactional service like Kachingle or Flattr to look at an image or video, read a text, or listen to a musical performance or composition. These are payments so minuscule that they barely register with our pocketbooks, but do earn their creators some measurable income in the aggregate.

Popular writers and artists would still far out-earn rivals who cater to more specialised tastes, but some of those appreciated by smaller audiences might be able to retain more of the earnings that they must give away, at present, to middlemen they cannot really afford to pay at all – intermediaries who rarely have the time or inclination to spend much time promoting their work.

So far, so-called Millennials – the generation in their twenties and early thirties now shaping our experience of the net — have shown little enthusiasm for micro-transactions. Their complaints about feeling cheated by corporate middlemen in the music business, when obliged to pay for the pleasure of  ‘sharing’ a song, are not completely incomprehensible.

But why are they so unenthusiastic about experimenting with micropayments — direct transactions between buyers and sellers?

Many ardent campaigners for the so-called ‘Freemium’ economy willingly pay small ransoms for the latest gadgets – even when these are only minor improvements or enhancements of last year’s versions, and are designed to fatten the profits of the hated capitalists. Few of them learn to cook simple meals from scratch: they are happy to pay huge mark-ups for bland microwaveable fare cooked and packaged by giant corporations, or to patronise  fast-food chains.

Why is it seemingly only art that turns them into Scrooges?

If more Millennials come to see themselves as artists, writers and musicians in years to come – using the democratic new publishing tools – will they become less unsympathetic?