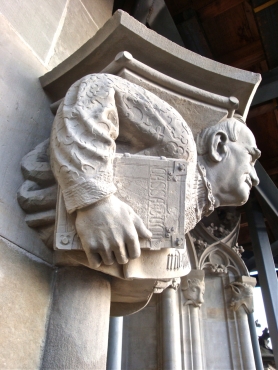 The coercion which the police state exercises on thought and art is indeed appalling. Yet the damage done may, in the final analysis, be no greater than that caused by the absolutism of the mass market. … The censorship which profit imposes on the media is as destructive, perhaps more so than that of political despotism.

That Fleet Street editors are once again ganging up to attack the Leveson Inquiry into press ethics and practices — concentrating their salvos, this time, on its as-yet-unpublished first report and recommendations – could turn out to be a great good thing.

Their aggression is inviting attention. It is giving everyone who cares about getting reliable news and facts undistorted by hidden agendas and special interests — for instance, the International Forum for Responsible Media (INFORRM) — a chance to remind the 4th Estate that public opinion is firmly on the Inquiry’s side.

… there is an important case to be fought in the court of public opinion over the next couple of months. A careful eye needs to be kept on press attempts to distort and manipulate the arguments to support the self-interest of its proprietors.

The self-interest to which it refers is, of course, the profit motive. That is true despite the longstanding tradition in which most of those proprietors have supported newspapers losing money decade after decade, as if red ink were simply natural for them, as intrinsic as spots for leopards or nuclear scent for polecats. Hardly anyone needs to be told, any more, that the reason why these proprietors have long competed ferociously for the privilege of owning papers is because of the fantastic levers they are for piling up profits in other spheres, and buying political influence.

We have quoted those words of George Steiner in this post’s epigraph before and we will quote them again – as often as necessary. That is, until it becomes common-or-garden wisdom that, just as the Wikipedia has brought us closer to the ideal of what an encyclopaedia can be, we need to refine forms of collaborative journalism. It has to be universally understood that journalism at its best has to be divorced from the profit motive. Just as the excellence of the Wikipedia has no connection whatsoever to improving any corporate ‘bottom line,’ there is no reason why journalism has to be directly or indirectly wedded to it any more.

The reason why no leader at the head of any prominent newspaper has risen to post-Gutenberg’s challenge – ‘Wanted: a brave newspaper, for an experiment in which readers become stakeholders‘ – is because they are  beholden to the old system of organising the dissemination of facts. They are well-paid indentured servants of the profit motive, enshrined as the ‘advertising-based business model’ for running papers.

The best possible outcome of the Leveson Inquiry is not in the least complicated. It would be an evolutionary restructuring of journalism to restore as its fundamental and only raisons d’être:

the quest for truth

forcing transparency in the exercise of political power.

It is this parallel with the Wikipedia that matters. The co-ownership of media and various forms of collaborative operation, in the practice of journalism, are simply the most logical means to that end.

Until we reach it, passages like this — from The Sonderberg Case, an Elie Wiesel novella about the harm that Nazism inflicted on the Nazis’ own descendants – will seem depressingly unattainable:

Actually, I had discovered journalism well before working in the field. My uncle Meir, early on, considered it the finest profession … He ranked the committed journalist as the equal of writers and philosophers.

[D]iversity of ownership is an indelible liberal principle because a corporate media monopoly threatens a free press almost as much as a state monopoly does.

[W]hat could emerge from this [is] not a sensible attempt to redefine journalistic ethics but a cack-handed attempt to restructure an industry.

Should we let novelists govern us? I am thinking, specifically, of thriller-writers of genius with a well-developed social conscience. Not entirely laughable, if you consider that at least one writer of fiction – Benjamin Disraeli (1804-81) – was a great British prime minister.

John le Carré was splashed all over the Guardian’s home page at the weekend in connection with the new film adaptation of his Tinker, Tailor, Soldier, Spy.  The explanation for the adoring treatment he gets everywhere is not just his literary gifts but his bottomless suspicion of authority, and of unfettered capitalism. This part of his appeal overlaps with Stieg Larsson’s.

How sad that the outrage these writers tap and focus in us is so hard to convert into desperately needed social reform – if not a revolution.

Last Thursday, commenters on Dan Gillmor’s Guardian piece on the conflicts of interest in the media’s move online dismissed it with loud yawns. ‘Most of the sentient world attaches about 1% of the importance to what’s going on in the media as the media do,’ sniffed someone dressed up as @SoundMoney.

Irritation is an understandable reaction to 4th Estate preening. But the complaint by @SoundMoney – which echoed the protests of thousands of readers bored by Hackgate – missed Dan Gillmor’s point. He was arguing for the alternative to traditional media sources for news and information that the 5th Estate represents.

Unfortunately, there is no one engaging the public the way a Le Carré or Larsson story can to explain why press regulation in Britain needs to be altered. Ideally, the ownership of the media will be diversified, as Nick Clegg says it ought to be – and it would be interesting to know if he and his fellow Lib Dems would support a diversification that went as far as the partially reader-owned structure for online publishing that this site is advocating as an experiment.

A public too bored by the talk of media reform to get to grips with how much less puffed-up and untrustworthy the media could be if the changes go far and deep enough is making it easy for powerful columnists like Simon Jenkins — anxious for the 4th Estate to retain command of mass communication — to get what they want:

That everyone knew journalists and the police were engaged in petty barter does not make it acceptable, let alone legal. Nor is it edifying to know how far politicians and editors are in and out of each other’s houses. But it is not the fall of the Berlin Wall or the Nuremberg trials.

… [T]oday’s stormcloud of hysteria is a poor prelude to what could emerge from this, not a sensible attempt to redefine journalistic ethics but a cack-handed attempt to restructure an industry. Perhaps instead the vast political and media resources currently on display might be redirected at the dire state of the nation, Europe and the world. They need it.

True enough. But doing anything about that ‘dire state’ means starting with the facts about it – from disseminators of facts we can trust.

If this sharp reader’s reaction is unjustified, Simon Jenkins has some explaining to do – not just to Britain but to the whole world, watching:

It’s not just the phone hacking; it’s the fact that the very fundamentals of our society have been undermined by undemocratic and authoritarian machinations, that we live – de facto – in a kind of hidden dictatorship in which the establishment of the police, media, and politicians have colluded and keep on colluding, beyond party lines.

Jenkins has missed the boat, or is defending something that is in his interest. Either way, he’s part of the problem.