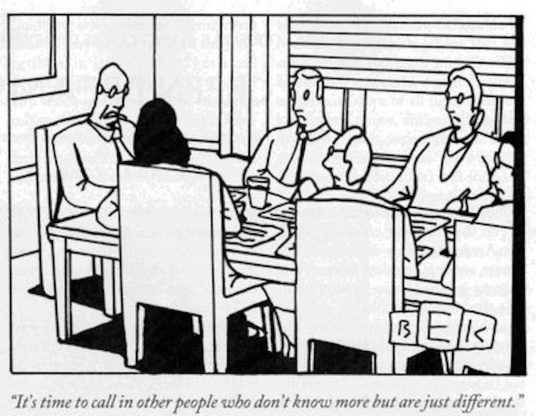 We are indebted to Ian Jack, writing in his latest Guardian column, for justifying our extreme suspicion of coercive social networking — and especially, of academic theorising about the value of something people have always done supposedly being on the verge of dominating everything else that we do.  (See footnotes for links to earlier entries on aspects of this alarming subject.)

Reflecting on a speech by Julia Hobsbawm, the new Honorary Visiting Professor in Networking at the Cass Business School at London’s City University – in which she pronounced ‘Facebook and Twitter … de facto, the new water cooler,’ but warned that extra-powerful networking takes place in ‘grassroots, lateral, face-to-face networks,’ — he noted,

The better people were connected, she said, the more they flourished. At the bottom end of the scale, “the completely un-networked” were often the unemployed. At the top end, networking away like barn dancers, were people who gathered at places such as Davos for the global events Hobsbawm always found “hugely stimulating and enjoyable” but regrettably confined to the same old elite. As I understood her talk, which may not be perfectly, the trick was somehow to open up these conclaves to less privileged people. Thus “social and intellectual plurality” would lead to “social and professional mobility”.

He came to this sad conclusion:

The Cass Business School should adopt a motto and paint it over the entrance: non quae sed quem cognoscis, not what you know but who. And thereby recognise the return of this unfortunate reality.

The New York Times, just as sceptical in its report of Julia Hobsbawm’s inaugural lecture, also emphasised her own splendid family and social connections as the key to her success – that she is the daughter of an eminent Marxist historian, Eric Hobsbawm, and was once the business partner of the wife of a former British prime minister in a public relations company.

Why do social networking theorists like her make their ideas so hard to understand?

Like Ian Jack, the New York paper quoted tiny snippets of her talk to convey deep bafflement – but post-Gutenberg did not really grasp what they were hinting at until we followed a link to a recording of exactly what she said. This longer segment of her lecture makes it easier to see why they found her — erm, ‘meta-concepts,’ is the way she and her fellow-theorists would probably put it, so elusive. We hope we have punctuated her words correctly in this transcript: it is not easy to decide how that should be done when struggling to make the ideas themselves fit together. After asking whether knowledge might be ‘more valuable when it is loose rather than tight,’ she continued,

The global workplace is itself becoming looser. Our graduate children are shadow-boxing hidden counterparts and hidden competitors on other continents. The Silicon Roundabout worker in London must be mobile and fluid because they may end up in Silicon Valley or someone from Silicon Valley may pinch their job. The garment producer in Mumbai may come from Mombasa. That’s because knowledge moves in a kind of diaspora now, uprooting from a fixed position and travelling. In fact, The Economist – again – noted in an article about diaspora networks last year that there are 215 million diaspora migrants in the world now. That’s the equivalent of 3 per cent of the world’s population taking ideas from over there back home. China’s growth may have more to do with the fact that over 500,000 people have studied abroad and returned, mostly within a single decade, bringing a huge brain surge through the ranks of think tanks and government.

The best expression of very loose knowledge that I can find is the sociologist Ronald S. Burt’s term ‘structural holes’. He describes the way ideas often form between formal [her emphasis] network nodes than in them. As Burt put it, and I quote, ‘Structural holes are the empty spaces in social structure. The value potential of structural holes is that they separate non-redundant sources of information, sources that are more additive than overlapping.’ And I’m minded to quote from Margaret Atwood’s The Handmaid’s Tale, in which she describes freedom as coming from ‘the blank white spaces on the edge of the print.’

‘Loose knowledge’, it would seem, is a stunning sequence of non sequiturs that could sink anyone listening for too long in a bottomless black hole.

Or, we might simply say, to encapsulate our yokelish incomprehension of the Hobsbawm networking spiel, very Swedish chef  … – in the hope that a few readers have come across this sublime Muppet Show character whose recipes could kill you, if you followed them – but that would call for understanding his directions.

How would introverts like Beckett — and Wittgenstein, Kafka and P.G. Wodehouse — have survived social media?

The Muppet Show’s Swedish chef in a meditative pause between utterances. http://www.olofssonfamily.se/wordpress/tag/the-muppet-show/