The press is telling hair-raising porkies about ♯Leveson: true or false? A media scholar settles the question 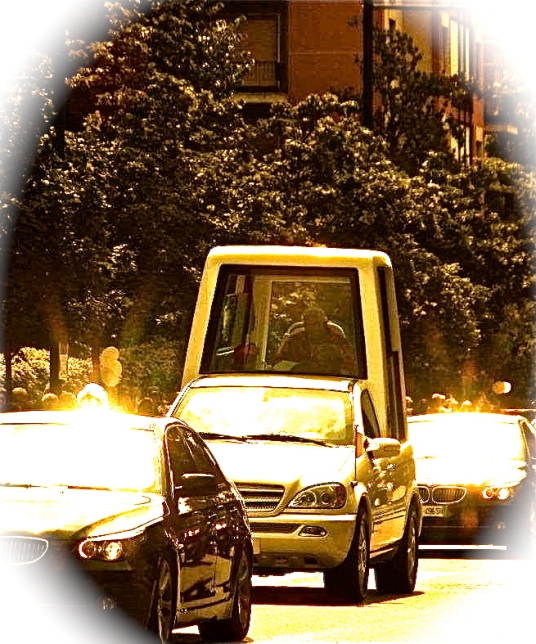 In his popemobile, Pope Benedict XVI, whose church once held the reins of ‘mass media’
— adaptation of a photograph by MIL22

@5th, a stimulating visitor to this site with a particular interest in open-access online education, said in a comment on a recent ♯Leveson post here:

[A]s long as the press establishment is tightly connected to politics and politicians it seems rather pointless to regulate it by political means. … I think you are quite right that it’s up to all of us to hold the press accountable, but it’s hard to see how this change will come about. Traditional newspapers (including their online editions) have a tremendous advantage in that they are already popular, and their popularity leads to a kind of positive feedback process where popularity generates popularity. It’s convenient for people to read what everybody else reads (and links to!). … I think it’s hard for citizen-journalists to really reach out to the public in part because […] they are simply scattered all over the web.

The essence of post-Gutenberg’s reply to 5th is: indeed, the famous names in print are still powerful. They could be for a long time, yet. But in diving into any news that matters to us, we now spend only as much time with them as we do on sites that did not exist ten years ago – and we use these new sources to check the truthfulness of what the papers say, and neutralise their biases. We are sure that we are not alone in this attention shift. Already, the key to finding the most reliable and enlightening information – and the right people to discuss it with – is using search engines well. These tools get cleverer by the week (never mind if Google’s picture-indexer often attaches to results for this site a sultry, dark-eyed blonde we regret we do not know).

On some days we, too, feel pessimistic about things changing too slowly – but change they will. On The Atlantic’s blog the other day, the headline for an entertaining – and accurate — post by Rebecca Rosen about the imminent departure of Pope Benedict XVI was, ‘The Last Time a Pope Resigned, Mass Media Was Called … Mass’.

Her point was that for much of Europe in the Middle Ages, the chief – and virtually, only – authoritative source of news about the wider world was the Catholic Church.

Then that was all turned upside-down. It was, of course, the Gutenberg press making it so easy for dissenters to disseminate texts exposing the Church’s lies and disinformation that broke religion’s monopoly on knowledge and learning.

Okay, we will concede that the Catholic Church still has over a billion adherents. To this day, the resignation of a pope is as liable to create a tweet storm as to sprout headlines wherever people read newspapers. But in its original European homeland, it has lost so much of its sway and credibility that less than half of all the world’s Catholics live there. The next leader of the Vatican could be Latin American or African – and arguably, should.

Memories of this church’s corrupt ancient past passed down from generation to generation, in Europe, have something to do with European disenchantment.

What we have been wondering lately is, … will the deliberate warping of the truth about the misuse of power by today’s print media be just as famous, in retellings of its story a hundred years from now?

With the kind permission of INFORRM, we are re-posting below the first part of a meticulous analysis of the scale of that distortion by Brian Cathcart, Professor of Journalism at London’s Kingston University, and the director of Hacked Off. We urge you to follow the link beneath our extract and read on.

Three weeks ago the great former Sunday Times editor Sir Harry Evans accused the national press of gross distortion and staggering misrepresentation in their coverage of Lord Justice Leveson’s report. Well, since then it has got a lot worse.

The papers have turned their megaphone up even louder and, using a range of distortions, misrepresentations and downright lies, they are trying to drown out all reasoned discussion of the Leveson report in the hope that it will vanish for good.

Most of the noise is not about regulation, which is the core of the report. Instead it is about other supposed Leveson outrages relating to whistleblowers, journalistic sources and other matters.

The aim is to muddy the waters around press self-regulation. Editors and proprietors want to conceal the fact that they are engaged in disreputable secret negotiations with ministers for the purpose of sabotaging Leveson.

Before looking at the misinformation campaign, we need to look at what is happening about the Leveson recommendations on regulation.

You may remember that the judge offered papers the chance to set up their own independent self-regulator. But to protect the public and ensure that this self-regulator did not just turn out to be another Press Complaints Commission, he also proposed the establishment of a ‘recognition body’ which every three years would check that the self-regulator met various basic standards.

Although Leveson said this recognition body must be totally independent of both the press and politicians, and must be backed by statute, David Cameron promptly threw a spanner in the works by coming out against any legislation. So now instead Conservative ministers want to create the recognition body by royal charter.

They published their draft of this charter last week and it was a scandalous document, because ministers had secretly allowed editors and proprietors to rewrite it to suit their own interests. If that royal charter were adopted, the press would escape accountability.

If you were an editor you would want your readers looking elsewhere while you engaged in such a disgraceful political fix, and this is what is happening. The megaphone has been turned up, and we are having distractions shouted at us.

Now let’s deal with the distractions in turn.

We are told that Leveson’s proposals mean it will be harder, or even impossible, for whistleblowers to bring stories of wrongdoing to the press. This is completely false, and you can read a full explanation here. In brief, Leveson in his report declared that whistleblowing was ‘justified and legitimate’, although he pointed out that in the case of the police service it might be a good idea if staff also had the alternative of reporting misconduct internally, rather than their only option being to go to the press. That’s it.

4 thoughts on “The press is telling hair-raising porkies about ♯Leveson: true or false? A media scholar settles the question”