Nuda Veritas: politicians in the UK and US, including the lying Brexit architects, fail to understand — or harness — internet culture’s radical transparency and reach 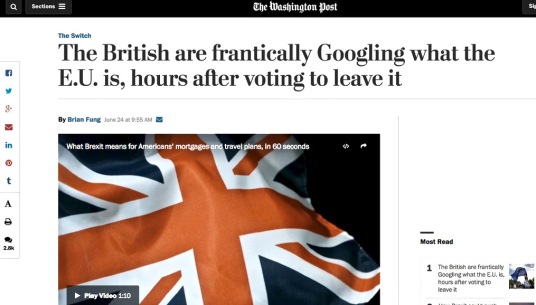 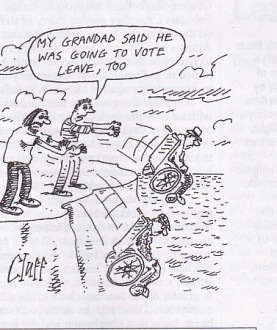 Who — other than diligent inspectors of comments on internet news-analysis sites — could have guessed that the don’t-trust-anyone-over-30 Baby Boomers would one day trivialise their offspring’s opinions savagely enough to bring to mind kittens carted off to have their necks broken on the way to drowning? That older cannot automatically be equated with wiser was obvious from the meeting of minds between Britain’s overwhelmingly pro-Europe, anti-Brexit, younger people (under 50) and a huge spectrum of brainy Establishment figures in science and the arts at home and abroad, including Stephen Hawking, Amartya Sen, George Soros, Henry Kissinger, John le Carré, Joanne Rowling, Pedro Almodovar, Renzo Piano, Kristin Scott Thomas, Benedict Cumberbatch, Elfriede Jelinek, Alfred Brendel and Peter Higgs.

Yes, Britain’s oldies won the referendum, but the headline that made our blood run cold on the day after Brexit belonged to the Washington Post’s most-emailed story, a report that UK Google search trends showed that too many Leavers had no glimmer of the meaning or consequences of their vote.

Digital communication tools let anyone communicate information to multitudes virtually for free. Yet David Cameron’s government and the media failed to implant in people’s heads the fundamental facts they required to make a rational choice. A transmission failure in the reverse direction was partly to blame. The leaders apparently had no inkling of how little Britons knew about the EU; or any visceral grasp of the dimensions of the resentment — by millions of Brexiters — of what the Union signified to them, in their enraged incomprehension. Or, that some people at the top who led the Brexit campaign, notably Boris Johnson and Michael Gove, did have the understanding Cameron lacked, and in the hope of using what they knew to replace him, spread lies about unattainable fantasies for a go-it-alone Britain. ( See ‘There are liars and then there’s Boris Johnson and Michael Gove’ by the Guardian’s Nick Cohen. )

We tried to envisage what most upsets Brexiters, from their perspective. An image of an overcrowded people-carrier floated onto a mental screen. The hot, sweaty passengers are miserable about being jabbed by each other’s elbows and knees, yet the driver — who has made it clear that he cannot drive if he has to share his seat or lap — keeps stopping to invite pedestrians to hop aboard and squeeze in. His answer to the groans of protest is lectures about the importance of compassion for the less fortunate. He, of course, stands for Britain’s government, and the passengers for those Britons forced to depend on and compete for underfunded and underperforming public services, overwhelmed by the steady influx of newcomers from other EU countries and elsewhere. Only the mass-circulation papers like The Daily Mail — and Private Eye — have been regularly reporting on the struggles of the National Health Service, the country’s most beloved institution: the hair-raising details of ambulances arriving too late; lives lost because diagnostic test appointments could not be scheduled for months or even years; seemingly every known shortcoming in the care of people trapped in hospital beds — and desperately overstretched medical staff. Many of the horror stories about old-age care homes are unbearable to read.

All this — in addition to instinctive tribalism, primitive xenophobia and racism — makes it possible to see why, to many Brexiters, the EU stands for nothing but immigrants, more immigrants and overcrowding. Many of them are unwilling dependents on public services. They are unemployed — their manufacturing jobs lost to someone in, probably, China. They lack the education or re-education they need to compete for white-collar jobs. These voters overlap heavily with the rank-and-file in the populist movements on which Bernie Sanders and Donald Trump have ridden into view in the U.S., and Jeremy Corbyn and Nigel Farage at their own opposing political poles in the U.K..

Only Sanders has had the charisma and intellectual muscle to engage that class of voters, as well as the U.S. equivalent of the younger people who voted to remain in the EU, yet also command the respect of leading thinkers — in spite of his many detractors in the Establishment. In a BBC interview, the Indian economist Amartya Sen, who won the 1998 Nobel prize in his field, praised Sanders’ ‘commendable effect on Democratic politics’ in broadening ‘the Democratic discussion’ about economic inequality and remedies for it — although he wished he would adopt a less divisive, super-rich-bashing tone.

No political candidate in the U.S. can match his following among millennials — who used the post-Gutenberg media in which they are so perfectly at home to magnetise other supporters. A superb analysis of his appeal to this group by one of them, Dasha Burns, on the CNN site, lacked only a recognition of how well he plays in digital media — his often wild, flyaway, dye-free hair and rumpled and unsmiling — crotchety — WYSIWYG appearance underlining the authenticity that is essential in this realm. Though seemingly a matter of mere exteriors, it is part of both his and Jeremy Corbyn’s appeal to young voters.

A new prime minister with a look that suits the zeitgeist: no dyed hair or Botox. The glint of humour in her eye, and her colours and clothes, hint that there will be more to Theresa May than Thatcherite steeliness

Although the young are mocked by their elders for their love of selfies, those critics forget that the rage for self-portraiture has also spawned a fashion for publishing deliberately unflattering photographs of themselves, and no-makeup selfies, and actresses who compete to appear apparently cosmetics-free on tabloid sites, ideally with fetching dark circles under their eyes. Perhaps this demographic segment is tired of delusional Boomer parents whose most expert hair-colouring, surgical re-shaping, and fanatical dieting only yields a creepy simulacrum of their own gleaming, taut-skinned, vital bodies, and such depressing conversational staples as, ‘Have you noticed that she’s got duck lips, now?’ Among successful women politicians, only Theresa May seems to have grasped this shift in the zeitgeist. Unlike Sanders, she always looks tidy, but does nothing to appear any younger; it seems as if the only sense of style she consults is her own, which is impressively apt; vibrant but natural.

The new digital tools do not merely allow radical transparency — the ability to let us see exactly what is going on upstairs, and how critical decisions are made. They demand it of authorities — in politics and government; medicine; law and the courts; academia and scholarship … even the secret services. James Comey, the head of the FBI, read this trend perfectly in the way he chose to announce the conclusion of his agency’s investigation into the Hillary Clinton email scandal. He was lambasted for delineating her transgressions and publicly upbraiding her for them — going beyond the convention of a simple announcement that there would be no criminal charges brought against her or her staff for their carelessness with classified emails, and her lies about their handling. But the mood and special needs of these times were encapsulated by one commentator quoted by Politico, referring to the disgusted reactions to Bill Clinton’s unscheduled meeting last week with the attorney-general, Loretta Lynch, with every appearance of seeking to charm her on his wife’s behalf:

“Given the public outcry over the events of the last week, transparency was clearly needed,” said Kathleen Rice, a former assistant general counsel at the FBI …”… especially given the FBI’s interest in being seen as an objective and apolitical law enforcement and intelligence agency.”

The FBI announcement finally emboldened the unimpeachable Maureen Dowd — seemingly the only New York Times columnist refusing to fall in line with her newspaper’s alarmingly biased coverage of this presidential election until a few weeks ago — to speak her mind about the Clinton candidacy.

In Britain, the brand new prime minister was just as responsive as Comey to the internet-mediated reversal of top-down politics-and-government-as usual. Some excerpts from the Daily Mail‘s report of the unbelievable speech, for a Conservative leader, that she delivered an hour before the news that she would be replacing David Cameron on Wednesday – an address anyone would have sworn was written by Bernie Sanders:

Theresa May pledged new laws to block fat cat pay and bonuses as she promised to stand up for ordinary workers in an passionate speech just an hour before her leadership rival pulled out of the contest.

The new Tory leader, 59, will also give consumers and staff a seat on company boards in a bid to crack down on ‘corporate irresponsibility’.

The changes are intended to show Mrs May can ‘completely, absolutely, unequivocally’ reach out to the blue-collar workers who were the bedrock of Mrs Thatcher’s electoral success.

In a speech in Birmingham on Monday morning … Mrs May also pledged to build a Britain ‘that works for everyone, not just the privileged few’.

‘The people who run big businesses are supposed to be accountable to outsiders, to non-executive directors, who are supposed to ask the difficult questions, think about the long-term and defend the interests of shareholders.

‘In practice, they are drawn from the same, narrow social and professional circles as the executive team and – as we have seen time and time again – the scrutiny they provide is just not good enough.

… Outlining her commitment to getting tough on ‘corporate irresponsibility’, she added: ‘We’re the Conservative Party, and yes we’re the party of enterprise, but that does not mean we should be prepared to accept that “anything goes”.

‘I want to make shareholder votes on corporate pay not just advisory but binding.’

Should she fail to keep these promises — as we hope she will not — painful reminders of them will be written large on websites all over the world. For as long as she lives, and at least as long as the net lasts.