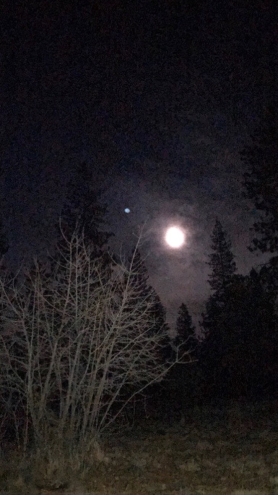 New Year’s Day supermoon with an unidentified turquoise celestial neighbour (or was it an Air Canada plane? See comments below our last post.)

Can a critical shift in a country’s cultural pulse and tone be detectible almost instantly by someone travelling into its cities after a year of rural seclusion? Without going into details, our answer — based both on what we saw and heard last week, and reports from other people-watchers in America and Britain — must be an unequivocal yes.

It is as plain as can be that large segments of the populations of these nations whose power was founded on trade with the whole world or massive, intercontinental migration, are now drawbridgers intent on shutting out the globe. Their history makes the shift almost incommensurable with the rise of xenophobia elsewhere.

It’s a reversal that should be of interest to anyone reflecting on interpretations by experts of the subject of our last post, Florian Henckel von Donnersmarck’s masterly conjuring — by taking infinite pains over subtle minutiae — of the look and feel of an actual surveillance state in modern times. Just as a camera can sometimes show us what can’t be seen by the naked eye, films can thrust us deeper into the textures and emotional atmosphere of the ‘truth hidden in plain sight,’ whose unveiling is conventionally said to define the task of journalists.

Only by studying images created by a camera flash could we see the whole scene, including the naked branches of the bush in the foreground of another picture from our New Year’s Day camera-clicking, a shrub whose outlines we were not so much looking at as sensing.

A story well told has the same capacity for higher-wattage illumination, but — sadly — what it exposes about the past or present can be no guide at all to what lies ahead. This becomes clear from rereading a 2007 review of The Lives of Others (Das Leben der Anderen) by a British journalist, Tim Garton Ash, who actually lived in the GDR (East Germany); had the unwanted honour of being subjected to Stasi monitoring; and acquired his own file in their archives. Unsurprisingly, no other review begins to approach the insight his has to offer. But the confidence he expressed in that commentary about the wholesale rooting-out of xenophobia after Germany’s reunification in 1990 would prove to be misplaced a mere decade later — the inescapable conclusion from an essay he published in December last year.

The contrast between his earlier and later pulse-taking does not make good bed-time reading for anyone mulling the question of where the new fear of foreigners in the rest of the West could take us by, say, 2028. (Anyone with a good crystal ball is specially invited to comment below — as are any astronomers, amateur or professional, who can identify the turquoise blue satellite (neighbour?) to the left of the moon in our photograph.)

In the excerpts that follow, the second set is taken from his assessment of ‘the cultural struggle for Germany’s future,’ focusing on the rise of the nationalist party, the Alternative für Deutschland (AfD or the Alternative), which is the equivalent of Britain’s UKIP and France’s Front National. Most baffling, other than the speed at which this ultra-conservative organisation has grown, is that its supporters’ hatred of immigrants appears to have no connection to economic hardship or disadvantages, and that one of its leaders lives with a partner of the same sex of Sri Lankan descent.

One of Germany’s most singular achievements is to have associated itself so intimately in the world’s imagination with the darkest evils of the two worst political systems of the most murderous century in human history. The words “Nazi,” “SS,” and “Auschwitz” are already global synonyms for the deepest inhumanity of fascism. Now the word “Stasi” is becoming a default global synonym for the secret police terrors of communism. The worldwide success of Florian Henckel von Donnersmarck’s deservedly Oscar-winning film The Lives of Others will strengthen that second link, building as it does on the preprogramming of our imaginations by the first. Nazi, Stasi: Germany’s festering half-rhyme.

… The Germany in which this film was produced, in the early years of the twenty-first century, is one of the most free and civilized countries on earth. In this Germany, human rights and civil liberties are today more jealously and effectively protected than (it pains me to say) in traditional homelands of liberty such as Britain and the United States. In this good land, the professionalism of its historians, the investigative skills of its journalists, the seriousness of its parliamentarians, the generosity of its funders, the idealism of its priests and moralists, the creative genius of its writers, and, yes, the brilliance of its filmmakers have all combined to cement in the world’s imagination the most indelible association of Germany with evil. Yet without these efforts, Germany would never have become such a good land …

… Xenophobic right-wing nationalism—in Germany of all places? The very fact that observers express surprise indicates how much Germany has changed since 1945. These days, we expect more of Germany than of ourselves.

… The Alternative scores best in what we still loosely call East Germany, that is, the territory of the former German Democratic Republic. There is a striking inverse correlation between the number of immigrants (or people of migrant origin) in an area and the populist vote: East Germany has the fewest immigrants and the most AfD voters.

… It would require a longer essay to explore the collective psychology of this East German vote, but its ingredients certainly include the poisonous legacy of a society behind the Berlin Wall that was anything but open and multicultural. There is also a resentful feeling among East Germans that they have been treated as second-class citizens in united Germany: not given enough attention, not paid due respect. When a street protest in a small town in Saxony was totally ignored by the visiting Chancellor Merkel, a protester complained, “She doesn’t look at us even with her ass!” One can imagine a Trump voter saying something similar about Hillary Clinton. In explaining the populist vote in many countries, the inequality of attention is at least as important as economic inequality.

… Unlike in Britain and America, economic factors play only a small part here. It’s not just that Germany as a whole is doing well economically. In a 2016 poll, four out of five AfD voters described their personal economic situation as “good” or “very good.” This is not a party of the economically “left behind.” It gathers the discontented from every walk of life, but those who predominate in its ranks are educated, middle-class men. A leading CDU politician told me that the angry protest letters he gets from defectors to the Alternative will typically be from a doctor, businessman, lawyer, or professor. This strong presence of the educated upper middle class distinguishes German populism from many other populisms.

… As for Alice Weidel: this former Goldman Sachs and Allianz asset manager, white, blonde, always neatly turned out in business attire, lives just across the border in Switzerland, in a same-sex relationship with a Swiss filmmaker of Sinhalese heritage and two adopted sons. These are not the German equivalent of the American rust belt manual worker, or of what is known in England, with liberal condescension, as “white van man.” (The van is white as well as the man.)

“It’s the economy, stupid” simply does not apply to Germany’s populist voters. Rather, it’s the Kultur. (I say Kultur, rather than simply culture, because the German word implies both culture and ethno-cultural identity, and has traditionally been counterposed to liberal, cosmopolitan Zivilisation.) …