Fasnacht is being celebrated, now, in Olten, which is at centre-stage in a tale of two cities in a two-part photo essay on Exposure.co (part 1 and part 2). — photographs by postgutenberg [at] gmail.com

An old idea of cynics is that the worst Christians are always in church to confess their sins on Sundays – in the belief that they are free, after that, to behave as disgracefully as they please for the rest of the week.

Certain aspects of the tradition of pre-Lenten license and lasciviousness could be an approximate parallel, across a whole society, for transactional piety or pseudo-piety – at least, in society as it used to be, when most Westerners were still church-goers. But the parallel is only interesting to weigh as a possibility, and cannot be stretched very far.

In the second half of this post, the connection between Lent and the winter carnival that has preceded it since the Middle Ages, in parts of Europe – and known by the Germans and Swiss as Fasnacht — is explained by Burcu Bayer, a young graduate student in the philosophy department of Turkey’s Yildirim Beyazit University. What she says with a delicious freshness, in a text with distinct notes of Google Translate, shows that Fasnacht-like celebrations are a hugely desirable social safety valve — unlike the petty bargains of hypocrites bending the confession box to their nefarious ends.

Indulging in a good old bacchanal before the fasting and other deprivations of Lent has, by ancient sanction, created an opening for have-nots to mock haves, and – for a few days – give the social order a good rattling.

It cannot be an accident that Switzerland, incontestably the world’s most disciplined and orderly society, celebrates Fasnacht’s setting aside of the usual rules for behaviour with special zest and relishing.

The street scenes in this post are from Olten, one of two rival cities in Enemies: a cash-strapped traveller’s search for the secret of Switzerland’s extreme equality, a book showing how the Swiss have managed to make extreme democracy practical – a long way from untethered intellectualising or idealism. There was certainly no drunkenness, obscene or wild behaviour on display anywhere the camera went on a Saturday afternoon and early evening (in a sequence of events recounted here.)

Olten has a strange and fascinating history as a leader in overthrowing feudalism – starting with its rebellion against the authority of the Catholic Church. The first of the two extracts that follow is from a review of a new book arguing that it was not the seeds of modern scientific thinking that led Westerners to value individual freedom and responsibility as supremely important, but dissent inside the Church:

‘What is the West about?” asks Larry Siedentop, an emeritus fellow of Keble College, Oxford. […] In “Inventing the Individual,” he asks where the Western understanding of liberty comes from and finds—unlike most political thinkers—that its source is Christianity.

This part of the answer, as Mr. Siedentop notes, may prove irritating, because it flies in the face of the comfortable idea that democratic liberty, like modern science, grew out of the 18th-century Enlightenment and, in particular, out of the Enlightenment’s struggle against a reactionary and oppressive church. Not so, he says. Western freedom centers on the notion of the responsible individual endowed with a sovereign conscience and unalienable rights, and that notion emerged, in stages, during the centuries between Paul the Apostle and the churchmen of the Middle Ages.

… In the ancient world, he says, the individual did not exist as such. Everyone had his place within a hierarchy, … the father as ruler of the family, the emperor as ruler of the state and its people, and the slave as a “human tool” subject to the will of his owner. Roman law presumed indelible distinctions: slave-free, citizen-alien, master-follower.

Christianity, as preached by St. Paul in the first century and by St. Augustine in the fourth, promised something quite different, and revolutionary. “In Paul’s writings,” Mr. Siedentop writes, “we see the emergence of a new sense of justice, founded on the assumption of moral equality rather than on natural inequality.

In Switzerland, the fire of religious revolution and ‘something quite different’ found abundant fuel in its founding tribes’ own — longstanding — traditions of egalitarianism.

Fasnacht fits those beautifully, as Burcu Bayer shows us – in an authorial voice resembling nothing you’d expect to read in a thesis but, rather, the forthright foreign student at the table next to yours, somewhere, on whose conversation you cannot help eavesdropping:

The Carnival of the middle ages has no parallel in modern times. The official feasts and celebrations were linked to the church, the feudal lords, or the state. Carnivals were related to one of the religious rituals, it was the last blowout before Lent. It was a time of excess, when the prohibitions on carnal satisfaction are abolished and popular creative energy is given full expression in the form of costumes, masks, songs, dances, puppet shows, poems, plays, etc.. Society is, in normal circumstances, ruled by the “head” i.e, in medieval Europe, the court and the church. During Carnival, hierarchy is not only suspended but inverted: The village idiot becomes king; sinners in priestly vestments preach nonsensical or blasphemous sermons. It is a space-time governed by the joyously eating, drinking, screwing and odor-emitting regions of corporal existence, which the mind ignores or otherwise represses. These features of Carnival lead us to relate it with a social criticism. To explain, inverted hierarchy can be read as an acquired right by a social movement, it is peasants’ right to be the head of the society.

Thus, these carnivals became an opportunity to protest. There are different levels of approaching this protest behavior of Carnivals. First line is the reversal of society where idiot becomes king; slave becomes master and so the hierarchy of society is inversed. A second life, a second world is constructed and it is a “world inside out”. It is a world like a utopian realm that freedom, equality and abundance exist.

– from ‘Carnivals as a Site of Protests during Renaissance,’ Burcu Bayer, 2013

Switzerland’s egalitarian spirit has its grassroots pushing up sturdy green blades towards possibilities still undreamt of in other places. Dreams that any Swiss citizen can seek to turn into reality through that quintessentially Swiss political tool, the referendum (as we showed in an earlier post here, quoting Diccon Bewes.) For example? … Well, how about the Basic Income Movement – founded on a vision of everyone being guaranteed a monthly payment large enough to meet fundamental necessities, with no conditions imposed, no questions asked:

This fall, a truck dumped eight million coins outside the Parliament building in Bern, one for every Swiss citizen. It was a publicity stunt for advocates of an audacious social policy that just might become reality in the tiny, rich country. Along with the coins, activists delivered 125,000 signatures — enough to trigger a Swiss public referendum, this time on providing a monthly income to every citizen, no strings attached. Every month, every Swiss person would receive a check from the government, no matter how rich or poor, how hardworking or lazy, how old or young. Poverty would disappear. Economists, needless to say, are sharply divided on what would reappear in its place — and whether such a basic-income scheme might have some appeal for other, less socialist countries too. 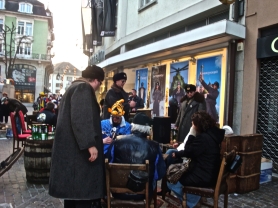